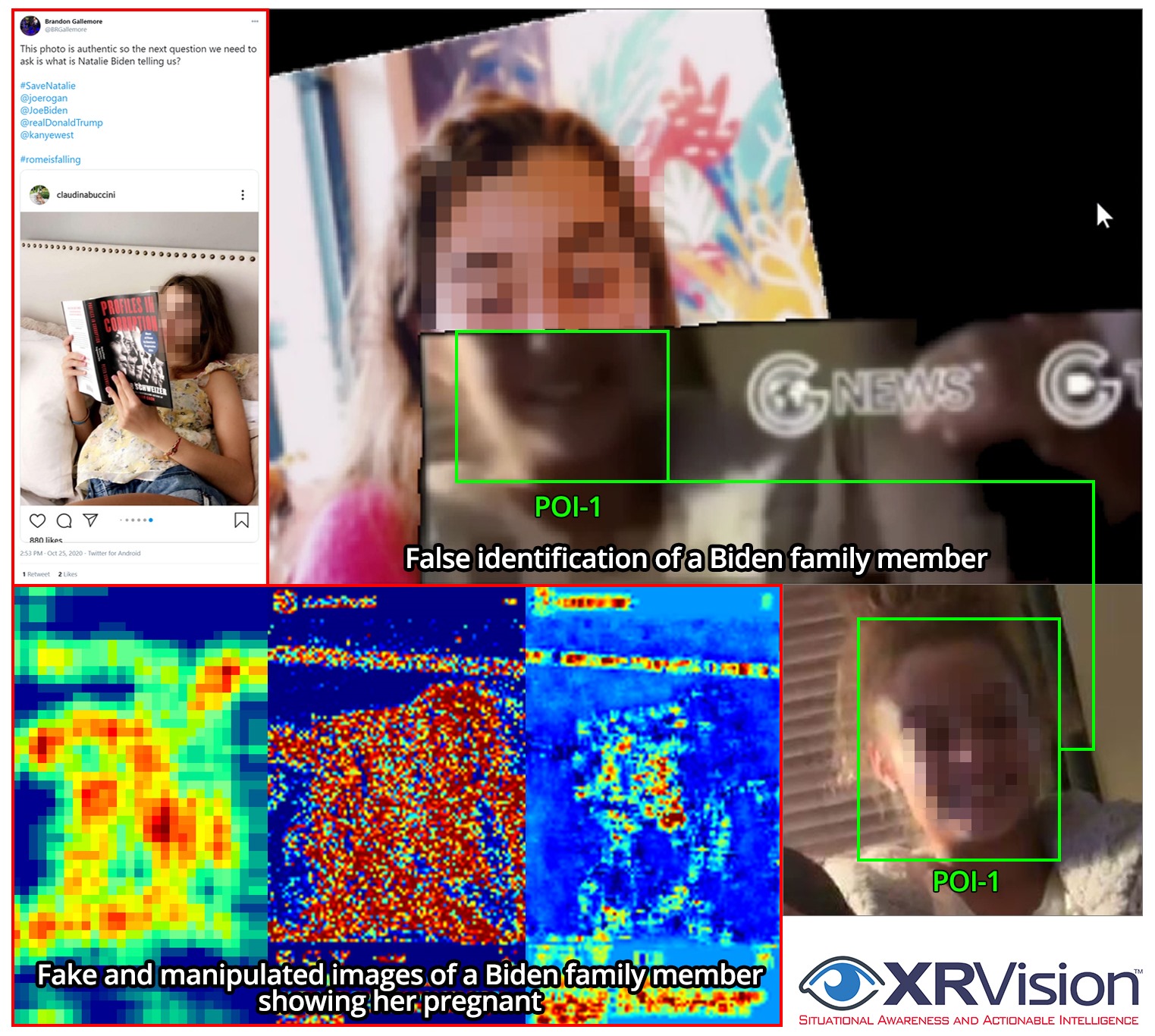 I’ve noticed that recently, some of the content in my posts is being repurposed on various forums and SM to make false claims that a video showing Hunter engaged in a foot related sexual act was with a young Biden family relative. Image 1: Sample image from a large number of G-TV generated composites and bogus analytics misidentifying the female in one of the Hunter laptop video images as a Natalie Biden

There are a number of these image composites that claim to identify a young Biden family member with Hunter. All of them are false. They are deepfakes, forgeries, or misidentifications.

The publishers of this content (some of which is high grade and professionally produced) are likely a part of coalition of media outlets that are trying to either kill the Hunter laptop story or manipulate it. These sources regularly circulate Hunter related disinformation, knowing that once it gains traction, it would be debunked by their allied fact checkers. The underling objective of all this is to destroy the credibility of the real damaging criminal evidence on Hunter’s hard drive. Image 2: Frame capture from the Hunter’s foot sex act video showing the actual individual that being falsely identified as a Natalie Biden

To set the record straight, the encounter between Hunter and the female seen in the video in question, was commercial in nature and the women was a consenting adult. This encounter like many others followed Hunter’s long established pattern of purchasing illegal drugs, trafficking, and sharing them with the sex workers (many of them Russian).

Does Art imitate Life?
There is no need to make-up false stories about Hunter Biden and his criminal exploits, he has a long history of disreputable conduct that involves deceit, dishonesty, lawlessness, and outright lying (including to law enforcement). In one illustrative example, In 2015, after the Ashley Madison hack/leak dumped their user database, several media outlets reached out to Hunter for comment because his email address and credit card were found in the record. The Biden damage control machine went on the offensive and claimed that this was a case of criminal identity theft. The whole story was explained as: Joe Biden’s Son: Ashley Madison Account Was Created In My Name By America’s Enemies

If this Russian origin story sounds vaguely familiar, it’s because it was used a year later to develop the DNC leak and the Russian collusion narratives. The Biden habit of finding Russians behind every bush and under every rock in DC seems to work every time. It’s just the gift that keeps on giving. Even Kafka couldn’t come up with a better plotline. Hunter, the progressive philosopher king, who is a card carrying member of the untouchables, gets caught red handed cheating on his wife. He then, with a straight face, deflects all responsibility and blames the Russians.

Despite the criminal allegations and the national security implications of his claim (Hunter had access to classified national security materials), tovarish Brannon and comrade Comey—who a year later led the charge promoting the Steele Dossier—never bothered to look into it. There were no congressional hearings, or a special counsel appointed. Not surprisingly, Hunter didn’t even file a police report. Image 3: Evidence of Hunter Biden’s continuous and uninterrupted use and ownership of the email account rhbdc1@gmail.com used to create his Ashley Madison profile

You don’t have to be a gifted intelligence analyst to prove that Hunter was using the Ashley Madison services in early 2014. Any investigative reporter worth his salt could have done that in a minute. The evidence is clear and indisputable. Hunter was accessing Ashley Madison from his personal phones and other personal registered devices. He was talking to family members and friends on these device and conducting other business while browsing the site, which confirms that he was on these devices at the time. Image 4: Looking for love in all the wrong places. Sampling of Hunter’s on-line love searches, some of which resulted in confirmed hookups

His IP address at the time resolved to know locations, which match his travel itinerary, and he utilized payment methods which he positively verified. We even know who he was checking out on Ashley Madison. But, alas, in this post modern universe, none of this seems to matter because truth and facts are fluid. Or, as Kafka observed:

Document 2: “I do strongly feel that there should be some line in the statement that basically says “fuck you” I’m a private citizen and you are scumbags. The Biden bleach machine at work

Document 3: Francesca Chambers from the Daily Mail requesting a comment from Hunter about the use of his credit card on his Ashley Madison profile. Chambers ended up writing a puff piece that lacked any substantive proof

Hunter Use Of Ashley Madison In 2014

Document 4: Sampling of incidents of Hunter’s use of Ashley Madison in 2014 that predate the infamous leaked June 2014 $280 transaction. These other activities had confirmed payments that came from his phone and his Amex card