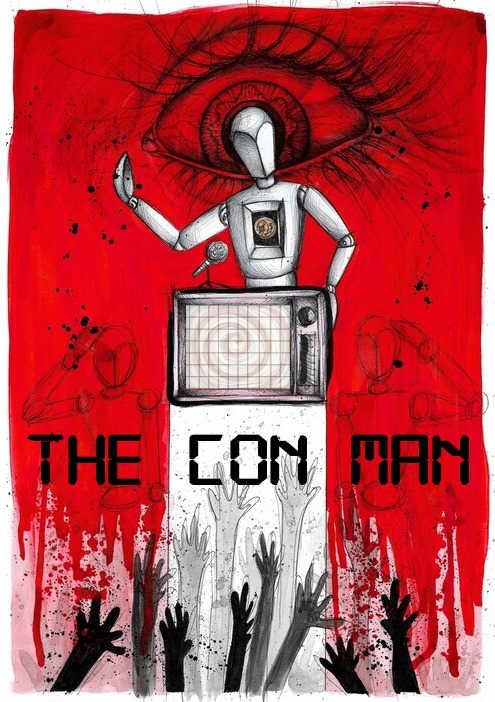 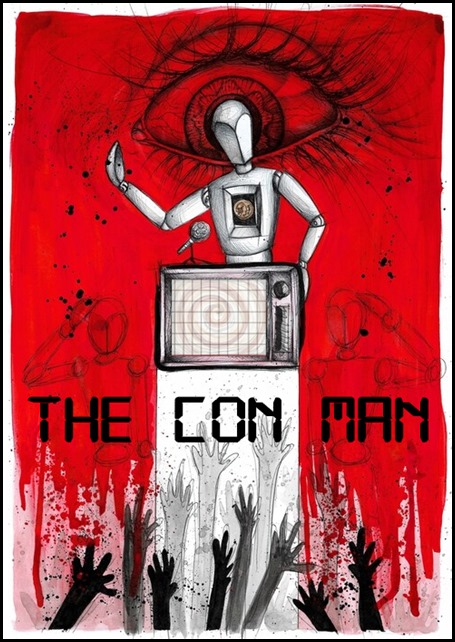 These articles claim to have a positive proof of a massive coordinated international cyber-attack against multiple US election sites during the first week of November, 2020. The stated aim of this attack was allegedly to steal the election from Trump. The authors of these articles claim that two secret tools were used in the attack: one called “Hammer” and the second called “Scorecard”. The source of this highly secretive information was a mysterious and ‘well connected’ individual by the name of Dennis Montgomery.

The American Report articles came with a large number of supporting data sets and animated charts (the same material was also used in Mike Lindell’s movie “Absolute Proof”) that purports to show the details of these cyber-attacks. The data includes source and target IP and MAC addresses, the method of infiltration, and the vote count changes to several voting systems. All in all, it seems like a real smoking gun and the stuff that cyber unicorn dreams are made of.

I wasn’t aware of this claim until a friend asked me to look it over. It didn’t take long to reach the conclusion that the Montgomery data referenced in the two articles and in Lindell’s movie is a crude fabrication and is a forgery. 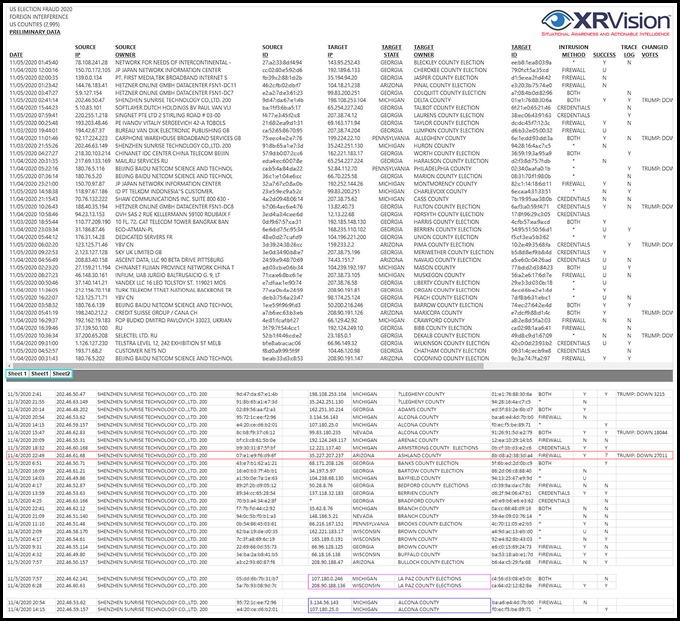 Image 1: Sample data anomalies: (1) A sources for the alleged attack, an entity called “SHENZHEN SUNRISE TECHNOLOGY CO.,LTD. 200”, is a Shenzhen/Hong Kong based company, but, instead of providing a specific IP address with a building, floor, and room # location of the machine which is allegedly launching the attack, it lists 157 generic company IP addresses. (2) The “LA PAZ COUNTY ELECTIONS”, which is in Arizona, shows up in two different states (Michigan and Wisconsin) with two different IP addresses. (3) The IP address of the Michigan Alcona county target is both 3.134.56.143 (Columbus, Ohio) and 107.180.25.0 (Ashburn, Virginia)

Running even basic analytics on Montgomery’s data shows that it’s laced with errors and anomalies. Here are a few examples:

As for Dennis Montgomery, the source behind this high value intelligence, he is a certified lifelong con-man with what appears to be a long rap sheet of scams. As Ecclesiastes 1:9 observes, there is nothing new under the sun and it turns out that Montgomery’s latest con is almost identical to several others he pulled off over the years on targets such as the DoD, CIA, various LEAs, and the DOJ. 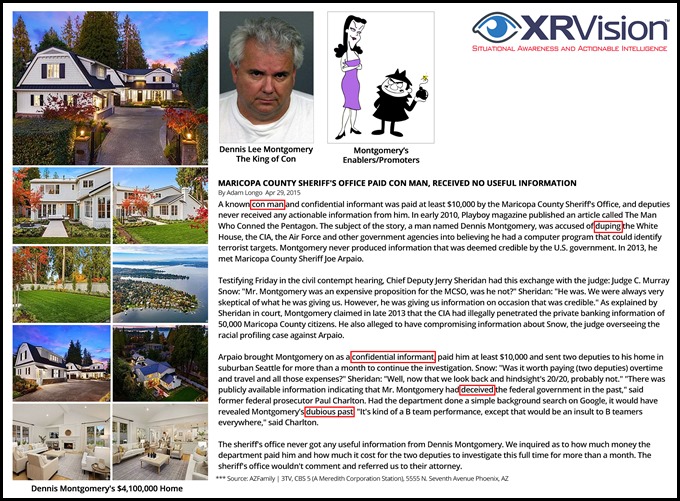 Image 2: The profile of Dennis Montgomery, the king of con

It’s not entirely clear who paid Montgomery to create/promote this fabrication. Motivation wise, it could be just another money-making venture, but, it’s more likely a well-organized and funded active measures that is designed to kill any discussion about real election fraud.

As for his chief promoter Mary Fanning and Alan Jones, conducting a cursory evaluation of their body of work shows little original intelligence and a large amount of high grade/high volume disinformation operations. Here is one example (and don’t worry, you don’t need top secret US government clearance and years of intelligence training to view/understand it).

In a January 14, 2021 tweet entitled:  “PRO RUSSIAN LDNR OPERATIVE WITH ANTIFA AT THE CAPITAL BUILDING”, Fanning positively identified an Antifa and a Russian operator at the Capital riots. This post illustrates her MO. A continues spray of tiny bits of truth in a sea of deception, also known as the firehose of falsehoods. 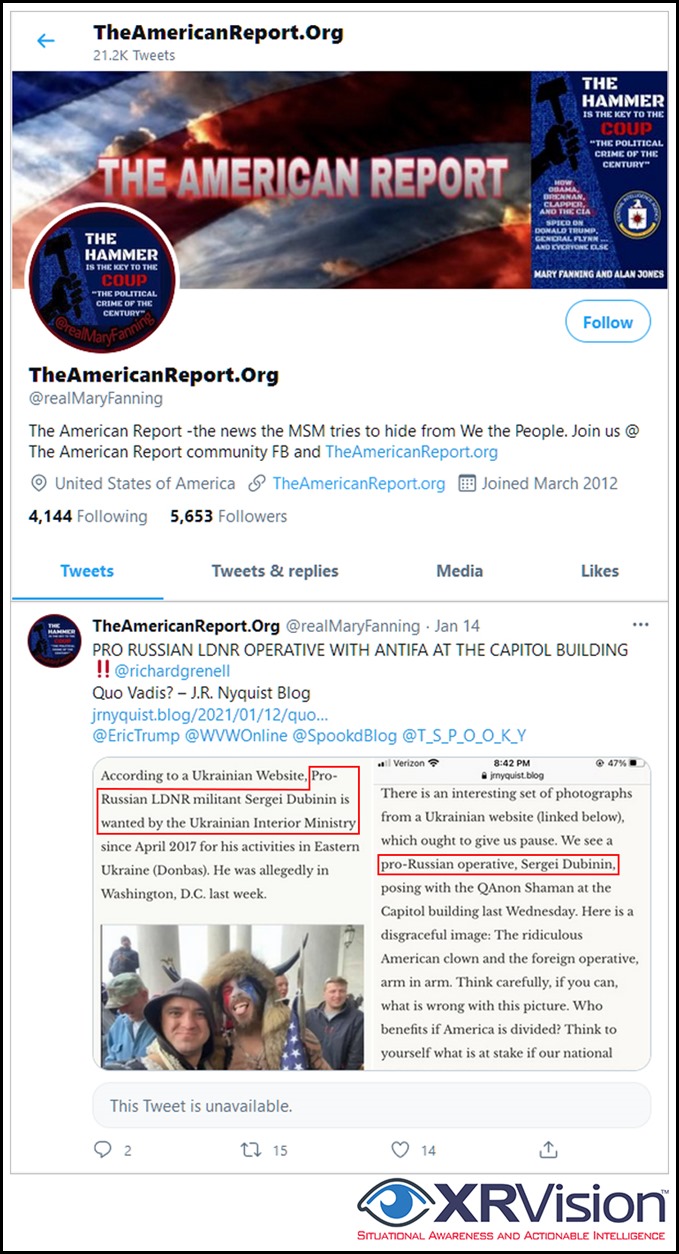 The individual depicted in Mary Fanning’s image standing next to the horned Viking (an actor that goes by the name of Jake Angeli AKA Jacob Anthony Chansley, who has no public ties to Antifa) is indeed Sergai Dybynyn, but, the classification of his political and operational linkage is wrong. Dybynyn is affiliated with members of the Ukrainian nationalist movement, some of which openly embrace extreme rightwing and fascist ideologies. Fanning’s arrest warrant source claim for Dybynyn is also wrong, it wasn’t issued by the “Ukrainian Ministry of Interior” but rather by the Pro-Russian separatist: “DSP of the Ministry of Internal Affairs of the LPR (Lugansk People’s Republic).” 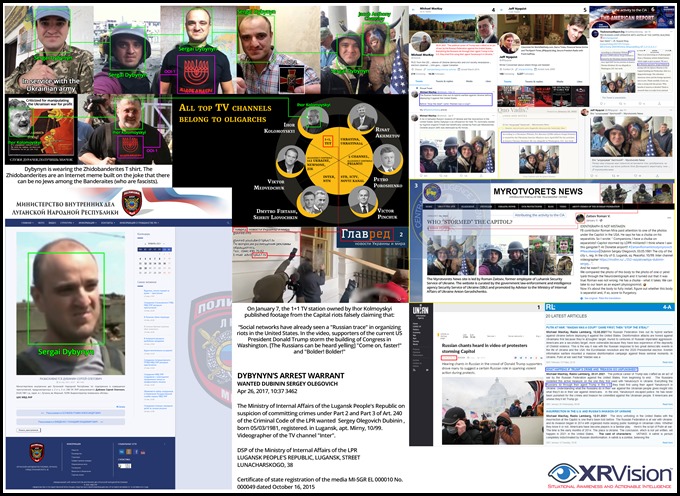 Image 4: Disinformation in its purest form and its sources. The actual identity of Sergai Dybynyn, who Mary Fanning misidentified during the Capital riots as “pro-Russian” and his arrest warrant by the Lugansk People’s Republic. Before you start screaming that the “Zhidobanderite” image on Ihor Kolomoysky’s T-shirt was photoshopped, chill, this alliance/marriage of convenience with the ideology of the Právyi Séktor is well documented. 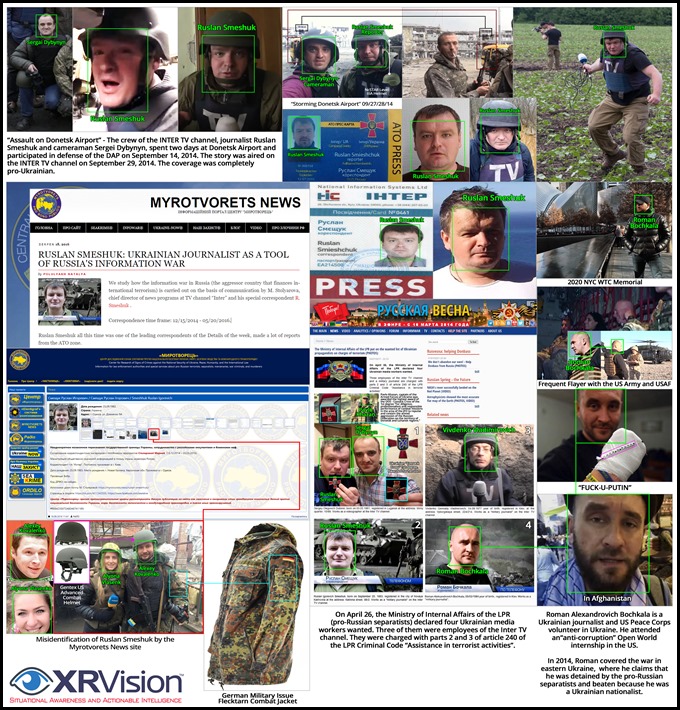 Image 5: A deeper dive into Dybynyn and three other related individuals wanted in the LPR arrest warrants. All four are Ukrainian nationalists. Roman Bochkala, one of the wanted man, is a US Peace Corps volunteer in Ukraine who visits the US regularly and has attended training in the US (via the Open World program). Interestingly, he also seems to be frequent flyer on various US military aircrafts. If you are still not convinced about what these people really think about the Russians, check the message on Roman’s right hand bandage.

My advice to anyone reading The American Report and contemplating swallowing the Montgomery forgeries or other Q-Anon sleeping pills is; be aware of false prophets, they come to you in sheep’s clothing but inwardly they are ravenous wolves.

If you want to investigate/prove possible election fraud, you don’t need hush-hush data that purports to come from ‘secrete leaked’ NSA/CIA projects or anonymous individuals. Just focus on factual legally obtained evidence that can stand-up in court. For example, official CCTV footage with chain of custody verification that shows identifiable vehicles delivering dozens of ballot boxes in the wee hours of the night. Scanning same ballots multiple times without supervision and the resulting one sided statistical vote anomalies should tell you something. If you claim to have seen ballots being trafficked/shredded/burned, produce the actual evidence, images of traffickers can be easily identified and shredded ballots can be easily reassembled. If you suspect voting machine irregularities in a specific race, conduct a manual re-count of the paper ballots and compare it to the voting machine count. Don’t accept any fantastic explanations about Delta force raids in Germany or votes being transmitted/manipulated overseas via military satellites. This is all disinformation that is designed to destroy the credibility of real voting fraud investigations and it’s coming from the same ‘patriotic’ republican establishment sources that produced Q-Anon and the Italian Job.

If you don’t like what you see around you and want to change it, don’t wait for the ‘good guys’ to do it for you. There are no good guys out there. JFK Jr. is not coming back to save us and you certainly shouldn’t trust Sessions or Barr. Instead, get personally involved and hold your representatives accountable at the ballot. Here is a simple litmus test: disregard what any politician says about foreign, economic, immigration and other policies.  Instead focus on one thing and one thing only: the complete breakup of big tech and SM monopolies like Microsoft, Google, Amazon, Facebook, and Twitter. This should be the only priority for the next election cycle. Any politician who didn’t/doesn’t actively works for their breakup and continues to support their Section 230 protection should be voted out of office.

Jeff Nyquist, who was Mary Fanning’s source for Dybynyn’s identification as a Russian operator at the capital claim has now updated his post to reflect Dybnynin’s actual political affiliation.

Audio 1: Excerpt of a 2017 Mike Zullo interview with Dennis Montgomery. Most of the claims made by Montgomery during the interview show a complete ignorance of cyber security tradecraft and practices

Document 2: A profile of DOJ asset? Montgomery’s indictment and conviction for 6 felonies from 2008 is still open as of September 14, 2020. 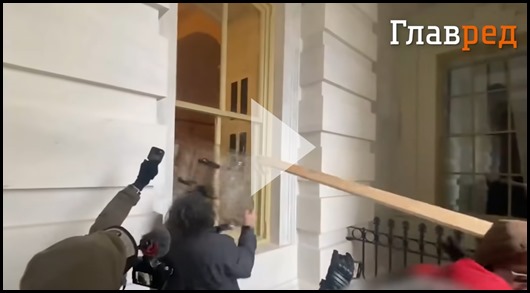 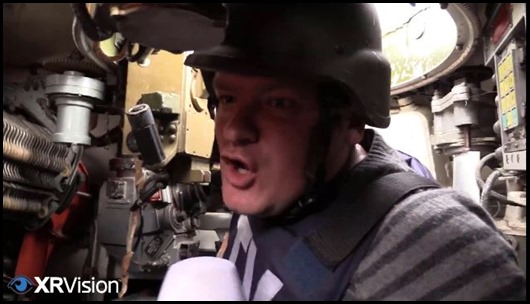 86 thoughts on “Operators, Hammers, Scorecards, and a Con Man”