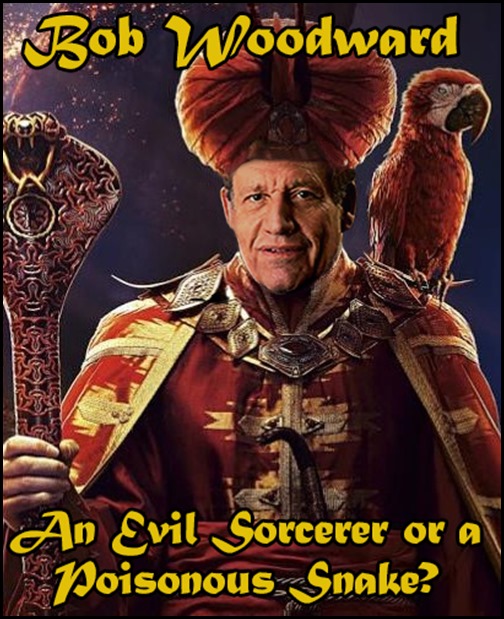 Every now and then, Bob Woodward slithers out from the DC pit where he and his brood of journalistic vipers keep warm. Once in public, he places a dark spell on some poor unsuspecting soul (under the guise of an interview) and then sinks his fangs into them. The venomous bite can have a wide range of toxic effects on the victim including: defamation paralysis, social delirium, and reputational sepsis. In terms of his target selection, Woodward has a strong preference for the sick and dying, but he has also been known to attack the deceased.

Before you read another one of Woodward’s masterpieces of lies and libel, you may want to familiarize yourself with this Jafar like creature. The following are a few samples of Woodward’s 40 years of paid literary hit pieces.

1. The made-up Watergate Exposé
The New York magazine wrote that Ben Bradlee, Bob Woodward’s own editor at WaPo, said that Woodward lied in his reporting about the 1973 Watergate scandal.

2. The fictitious Deep Throat
In his 1993 book “Deep Truth: The Lives of Bob Woodward and Carl Bernstein”, Adrian Havill wrote that Woodward’s claim of signaling his “Deep Throat” for meetings using a flowerpot on his balcony “does strain credulity”, since Woodward’s balcony faced an inner courtyard and wasn’t visible from a nearby alleyway. This and other structural inconsistencies in Woodward’s Watergate narrative as well as secondary sources confirm that ‘Deep Throat’ came directly from the Pentagon/CIA/FBI and not from a ‘morally outraged’ Nixon administration insider. So, in lieu of the righteous reporter fairy tale, Woodward and Bernstein should be viewed as a political hit team the likes of Fusion GPS and leading members of a junta/cabal that executed a successful coup against a sitting US president.

3. False claim that Justice William J. Brennan Jr. voted against his own judgment
In his 1979 book “The Brethren: Inside the Supreme Court”, Woodward alleges that Justice William J. Brennan Jr. voted against his own personal judgment in the case Moore v. Illinois in order not to offend Justice Harry A. Blackmun. According to Woodward and Scott Armstrong, Brennan knew that his vote was incorrect but declined to change it in order not to null Blackmun’s vote on abortion and obscenity cases. Anthony Lewis disputed this account, saying that the allegation was “without serious evidence” and that the story “leaves doubts not only about the authors’ understanding but about their scrupulousness.”  Lewis also stated that he had reached all 30 law clerks that were at the Supreme Court in the 1971 term and concluded that: “Their verdict on the story told by Woodward and Armstrong was overwhelmingly negative. The prevailing tone of their comments was disbelief, verging on contempt. The clerks who had personally worked on the case or had any direct knowledge of it all flatly rejected the story.”

4. Defamatory portrayal of John Belushi
In his 1984 book “Wired”, Woodward made numerous defamatory claims about John Belushi. Belusi’s family and friends were outraged about these claims. Dan Akroyd, a fellow Blues Brother and close friend, wrote in his book “Live from New York: An Uncensored History of Saturday Night Live”.  “There were certainly things that he [Woodward] just got patently wrong. He painted a portrait of John that was really inaccurate—certain stories in there that just weren’t true and never happened.”

5. Twisting Tenet’s WMD “slam dunk” quote
In his 2004 book “Plan of Attack”, Woodward claimed that CIA Director George Tenet said that it was a “slam dunk case” that Saddam Hussein had weapons of mass destruction.  However, Tenet claimed that his words were taken out of context and that he was being set up as a scapegoat for the failures of the Iraq War. In a “ 60 Minutes” interview, Tenet said that he had said “slam dunk” to suggest it would be easy to build a public case for the war.

6. The false claim about Reagan’s poor recovery
In his 2005 book “Veil: The Secret Wars of the CIA 1981-1987”, Woodward describes Ronald Reagan’s recovery from the 1981 assassination attempt as quite poor. He described one scene in which Reagan collapsed into a chair exhausted. Woodward wrote that in the days after his release from the hospital, Reagan could “concentrate for only a few minutes at a time” and in the following days was only able to “remain attentive only an hour or so a day.” Reagan’s physician, Dr. Daniel Ruge, disputed this portrayal, telling the AP that “his recovery was superb … I never saw anything like that [i.e. Woodward’s description] … it’s certainly news to me and I was there all the time.”

7. Exposing undercover CIA officers for financial gain
In his 2005 book “Veil: The Secret Wars of the CIA 1981-1987”, Woodward exposed the names of two CIA clandestine service officers. In 1987, shortly after finishing his assignment as the station chief in Brussels, Richard Holm discovered that his and Charles “Chuck” Cogen’s (1984–89 Paris station chief) identities were blown. The source of the disclosure was traced to a meeting that took place four years earlier in 1983. During that meeting, William Casey had asked Holm and Cogan to brief Woodward off the record about terror groups in the Middle East. Woodward, who habitually betrays the trust of the subjects of his interviews, failed to honor the conditions of the agreement and couldn’t pass on the opportunity to make a pretty penny on the leak. Based on additional evidence, it is also likely that during Woodward’s subsequent visit to Beirut while working on his book, he shared classified information about the agency/it’s operations with his ‘local contacts’, some of which were Hezbollah/Iranian agents.

8. The made-up deathbed scene of CIA’s Director William Casey
In his 2005 book “Veil: The Secret Wars of the CIA 1981-1987”, Woodward claims that Casey admitted on his deathbed that he had known about the diversion of Iran arms sale money to the Contras. But according to the Houston Chronicle, Casey’s daughter, Bernadette Casey Smith, claimed that Woodward “never got the deathbed confession”. Bernadette’s claim is supported by Kevin Shipp, a member of Casey’s CIA security detail, who asserted in his book “From the Company of Shadows”, that none of the agents standing guard over Casey allowed Woodward into his hospital room at Georgetown University Hospital, and that in any case the former CIA director was not able to talk at the time Woodward cited.

So What’s the Big Deal?
Why should the likes of Bob Woodward be exposed as frauds and be treated as habitual defamers? It’s because every strand of DNA in this award winning high priest of journalism is made-up of lies and deceit. Yet, despite a lifelong career in the creation and distribution of active measures, Woodward continues to be presented to the public by the NYT and WaPo as the guardian of truth and epitome of honest investigative reporting. In 1973, Woodward and a group of media/political conspirators staged a successful coup and brought down the Nixon administration. In 2016, forty three years later there was another coup attempt (that included many of the original actors such as Woodward, Bernstein, and Halper) to bring down the Trump administration. How much longer must we tolerate this Kafkaesque cast of characters? Will no one rid us of these meddlesome journalists?

As far as my classification conundrum, I’ve concluded that in addition to being a pathological liar, just like Jafar, Woodward is both, an evil sorcerer and a poisonous snake, and so is anyone who publishes/promotes him.

17 thoughts on “Is Bob Woodward an Evil Sorcerer or a Poisonous Snake?”