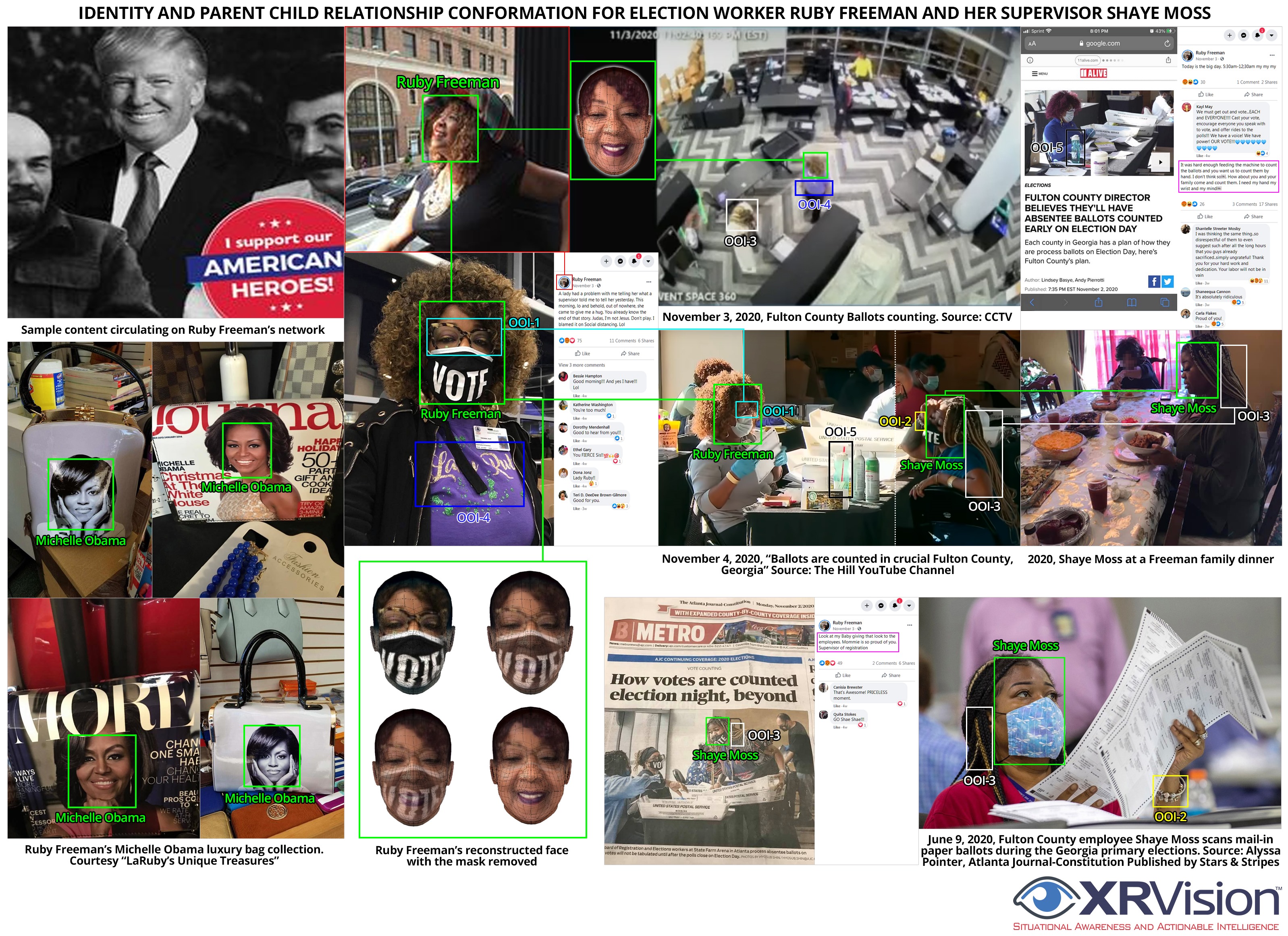 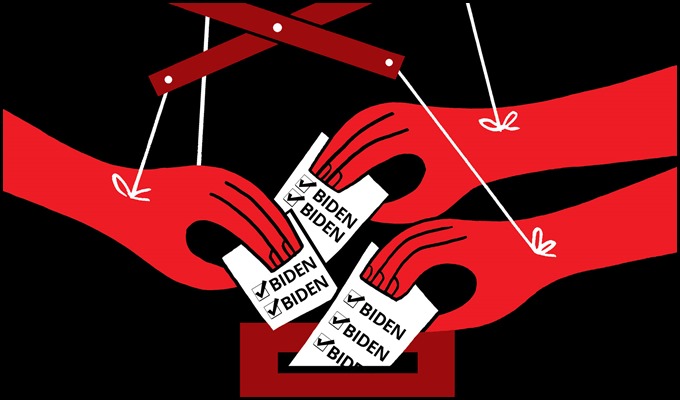 The following composites and details should help explain the context of the CCTV footage from the November 3rd ballot count in Fulton County, Georgia.

The video shows a four camera FOV of suite 604, the ballot processing room at the State Farm Arena. At 10:58:05 p.m., as the crew was finishing the clean-up at the end of the day, Ralph Jones, the floor supervisor (the bald man in a red shirt) received several calls on his cell phone. Shortly after his second call, he and another woman with black hair and blond braids (Shaye Moss) begun removing four rolling transport ballot boxes from under a black cloth covered table at the center of the room. At 11:02:52 p.m., they distribute the ballot trays from the boxes between four work stations. The ‘special’ count task force that consists of five individuals then starts feeding the ballots to four scanners. The ballot counting continued for close to two hours (112 minutes) and ended at about 12:58 a.m.

Running various video analytics such as motion pattern analysis on the footage yielded multiple evidence that the ‘special’ midnight count was pre-planned and carefully timed, it’s also clear from the 116 minute segment that the team sprinted through the ballot scanning process to reach some kind of a goal and or deadline. 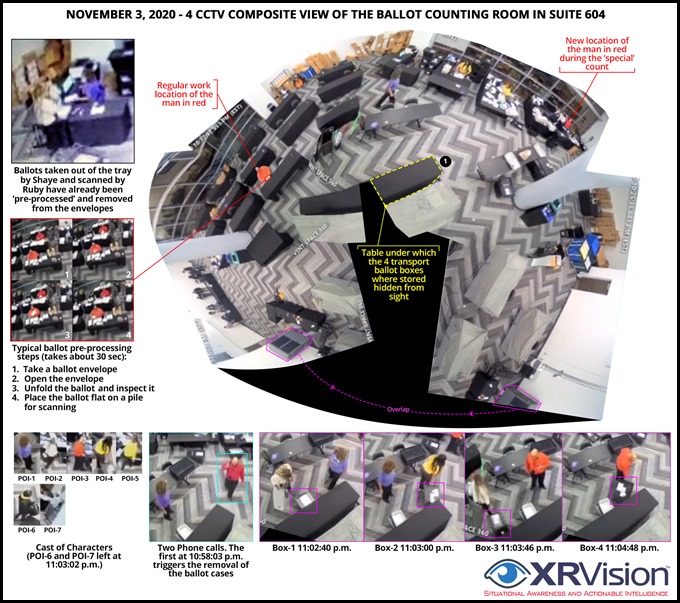 Image 1: A composite of 4 CCTV field of views of the ballot counting room in suite 604. The location of the table under which the 4 ballot storage boxes were kept, and several key events that took place prior to the ‘special’ ballot count

People, Activity, and Props
At 11:02 p.m., when the 4 ballot storage boxes were taken out, there were 7 individuals in the room. The state of the tables in the room shows that only 4 out of the 24 were in use and that there was no visible ballot processing/counting activity beyond the 4 designated tables that are clustered at the top right corner of Image 1. At 11:04 p.m., two additional individuals left for the night (POI-6 and POI-7). The only ballots scanning that ensued during the midnight session were the ones taken from under table in the middle of the room. A fifth ballot storage box under the table was pulled out, opened, but wasn’t processed. Of note is that the ballots that came from under the table had already been ‘pre-processed’ and were placed flat in the trays in preparation for scanning.

The ballot boxes taken from under the table were locked and required the use of keys to open them. It may be relevant that not all ballot boxes in the room were kept locked. 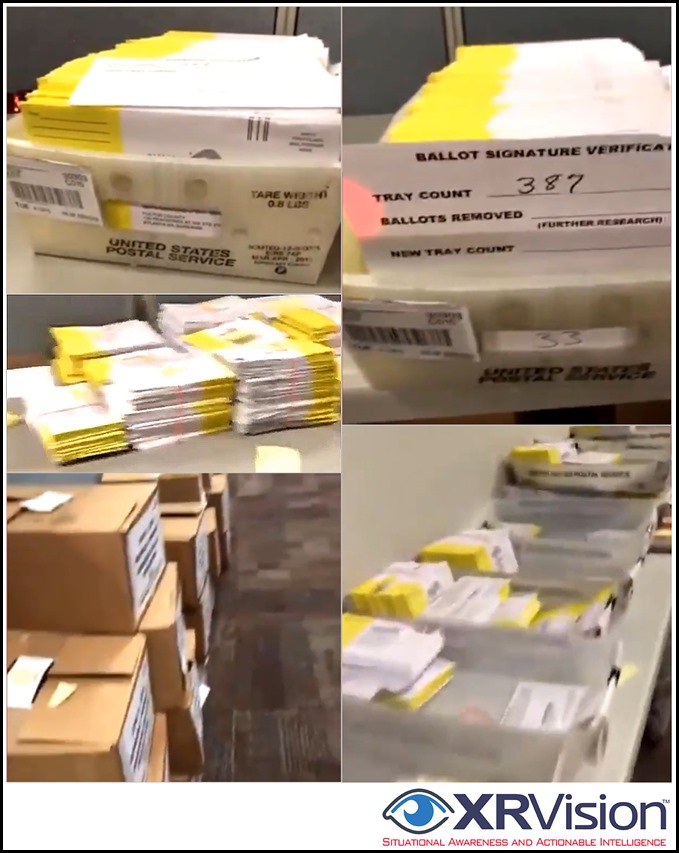 Image 2: Fulton county ballots in boxes and the USPS trays used to hold them. Each of the 4 rolling transport ballot boxes under the table contained about 6000 ballots (each tray with 500-2000 ballots) 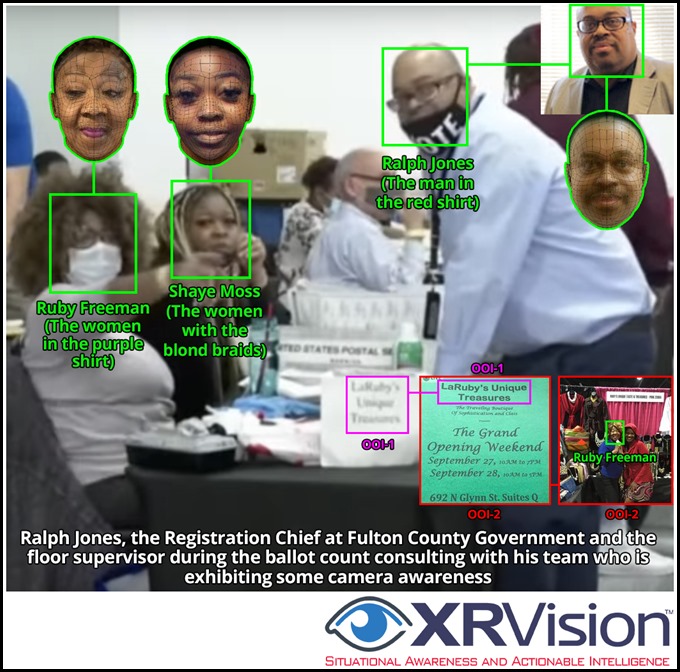 Image 3: The A Team: Ruby Freeman, her daughter Shaye Moss, and the floor supervisor Ralph Jones Sr. (the Registration Chief at Fulton County Government). Of note is that Jones has a history of ‘mismanagement’ and poor moral judgment

Water Leaks and the Official Stop Time of 10:30-11:00 p.m.
With respect to the events on Nov 3rd, the termination of the counting activity in the room and the presence of the skeleton staff didn’t correlate to the alleged leaking water pipe narrative. Robb Pitts and Ralph Jones told The Atlanta Journal-Constitution that the pipe burst at 6:07 a.m. and was repaired within two hours around 8 a.m. The burst water pipe media coverage is interesting because it illustrates a typical disinformation campaign. In less than 12 hours, the non-existent burst pipe morphed several times to a water main break, an overflowing urinal, and a leaky toilet. From the event timeline, it’s unlikely that even if there was an initial water leak, that it had anything to do with the claimed 2-4 hour delay and the evacuation of staff and observers that took place almost 15 hours later. Of note is that the initial claim of an alleged burst water pipe wasn’t even mentioned by county officials during their 10 a.m. press conference.

There is some confusion about the official statements of the intent to stop the ballot count at 10:00-11:00 p.m. There are at least two confirmed statements about this plan and both came from Ralph Jones the floor supervisor. The first was made on the morning of Nov 3rd by Jones to the AJC stating that 10:30 p.m. would be EOD. The second was made by Jones at about 6:35 p.m. during an emergency call with the Fulton County Board of Registration and Elections (see Audio 1 at 01:45:00). Its noteworthy that during the emergency evening call with the Fulton county board none of the six officials on the call challenged Jones about his plan to shutdown the count at 10-11 p.m. and accepted it as fact. 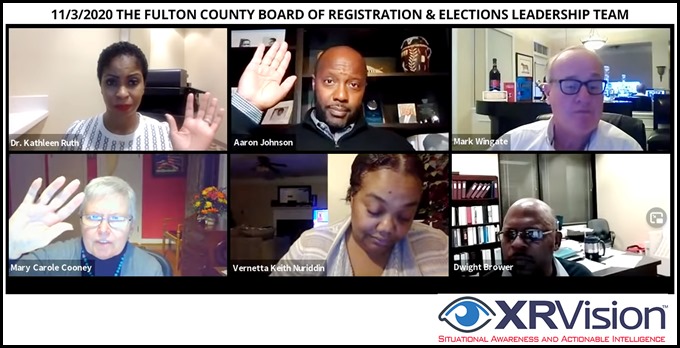 Image 4: The leadership team of the Fulton County Board of Registration and Elections present on the call with Ralph Jones

The footage confirms the shutdown plans and shows that as Jones advertised throughout the day, the room was cleared at about 10:48 p.m. It is also clear that five members of the midnight count team (that included Jones, Freeman, and Moss) had no intention of leaving as they continued to loiter in the room waiting for the Republican observers to leave. Moss, for example, was keeping busy dusting/wiping off the tables and walking around with little apparent purpose.

Estimate of the Number of Processed Ballots During the Midnight Count
It’s hard to calculate the exact number of ballots that came from the rolling boxes, but, a rough estimate that is based on 4 boxes (~500-3K ballots per box), the scanner speed/throughput (3K per hour), and the user motion associated with feeding the scanner yields a range of 6K-24K ballots. Obviously, without the proper controls (like duplicate ID detection) and supervision, these ballots could have also been scanned multiple times. 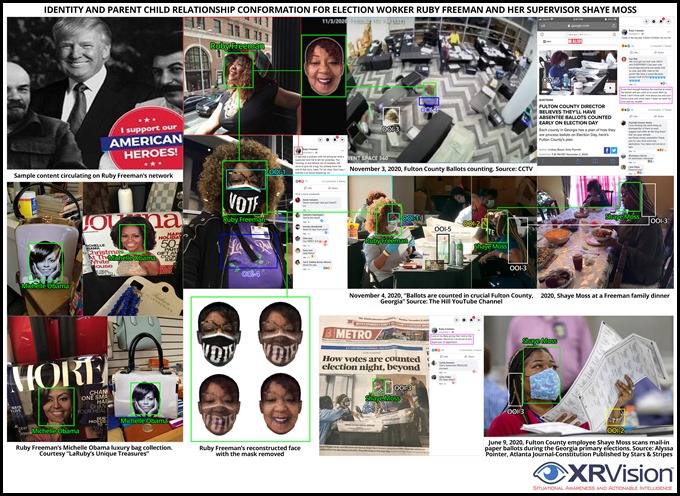 Image 5: The identity and relationship confirmation for two persons seen in the CCTV footage in suite 604. Two of the individuals took part in the removal of the 4 rolling transport ballot boxes and the resumption of the ballot count. The two are Ruby Freeman, an election worker and a democratic activist and her daughter, Shaye Moss who was a team election supervisor 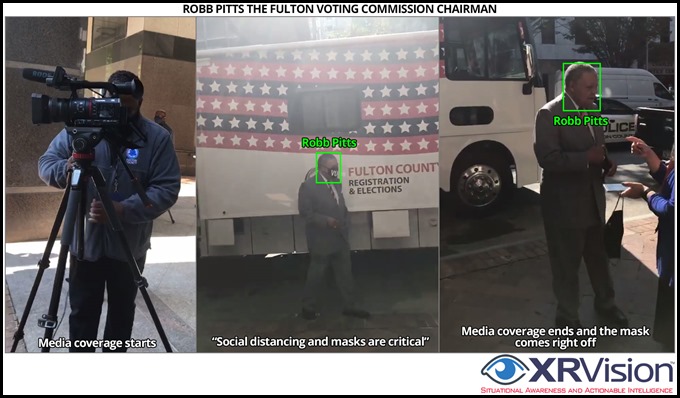 Pesky Questions
Over the past few days I’ve heard a lot of interesting theories about the midnight ballot count event in GA. But, what is ostensibly missing are the following fundamental answers to the who/why/what/how from the Clouseau style investigators who were combing the ground for clues of pro/anti-evidence of election fraud:

Final thoughts
My problem with the ‘special’ late night ballot count is not that it took place late at night (the count should have been uninterrupted until completion), but, that it was riddled with anomalies. Here are a few examples:

Politics aside, it’s possible that all of these issue have a logical explanation and nothing nefarious happened there. But it’s also possible that this is just the tip of the fraud iceberg. It would take very little skilled investigative resources and a bit of SIGINT, to either confirm or deny the voting fraud claims. An independent digital scan of the GA ballots images (which can be downloaded from multiple sources in a minute) would quickly help confirm the voting numbers. This scan would also be able to easily pickup show stoppers such as homemade ballots, ones that lack a fold line (i.e. ones that were never mailed), or signature by a person other than the voter.

It would behoove all parties if the feds appoint a special counsel to factually get to the bottom of this ASAP, because, If they don’t, this event will enter the history books as the defining example of voter fraud and destroy public trust in electronic voting in the US. 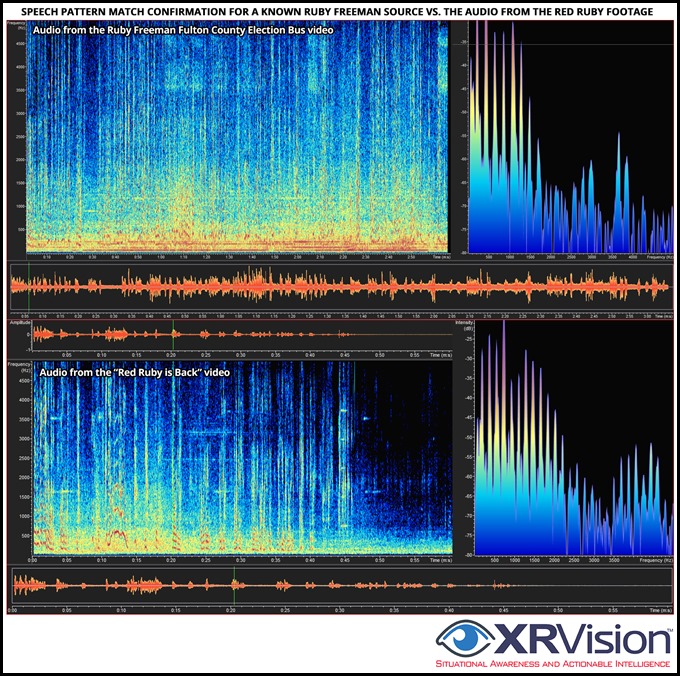 Image 7: Speech pattern confirmation for a known Ruby Freeman source vs. the audio from the Red Ruby footage