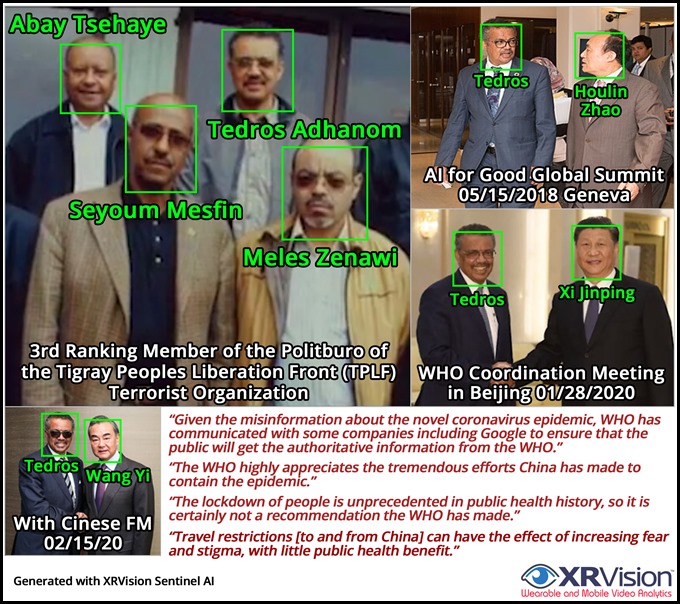 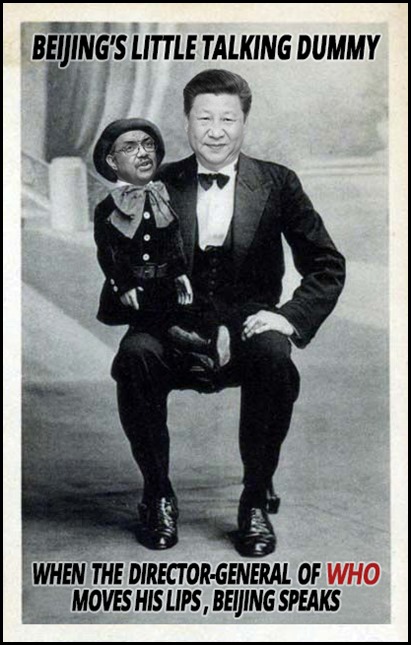 On February 15, 2020, the director-general of the World Health Organization (WHO), Tedros Adhanom Ghebreyesus, addressed the Munich Security Conference. At that time, there were only about 60K cases of Covid-19 in China and about 500 in the rest of the world. Tedros was more concerned with misinformation than with containment. In his address, he said:

“We’re not just fighting an epidemic; we’re fighting an infodemic. Fake news spreads faster and more easily than this virus, and is just as dangerous.” And if we don’t tackle this, he went on, “we are headed down a dark path that leads nowhere but division and disharmony.”

Even if Tedros was just moving his lips while the ministry of propaganda back in Beijing was doing the actual talking, truer words about the “dark path” have never been spoken. The whole Covid-19 affair with its denial of lab experiments, the fictitious Wet markets origin theory, inflated high mortality rates (currently claimed by the WHO to be 3.9% when in actuality it’s less than 0.4%), artificial shortage to PPE (it exists, it’s just being diverted away from the US by the Chinese), and incendiary MSM coverage, is most likely a Chines information/economic warfare campaign that is using the WHO, our politicians, and various media outlets for its payload delivery.

A Profile of a Chinese Enabler
Tedros was voted WHO director-general in 2017, replacing another incompetent Chinese medical prodigy, Dr. Margaret Chan. Tedros is the first WHO director-general without a medical degree. He also possesses the worst job qualifications in the written history of employment.

Tedros got his bachelors degree in biology from the University of Asmara in Eritrea. After his graduation, he served in a junior position at the Ministry of Health under the Marxist dictatorship of Mengistu. After the fall of Mengistu in 1991, he popped-up in the UK and got a masters degree in Immunology of Infectious Diseases from the University of London. In 2000, he got a PhD in Community Health from the University of Nottingham. His dissertation was titled: “The effects of dams on malaria transmission in Tigray Region, northern Ethiopia.” From the writing style analysis of the dissertation, it is unlikely that he actually wrote it himself.

Just like another incompetent British sponsored PhD named Joseph Mifsud, Tedros’s subsidized academic pedigree also hints of political grooming. This plan apparently derailed when Tedros chose to become a Chinese client instead of continuing to pay homage to his old (and cash-strapped) patrons at the British Foreign and Commonwealth Office.

From 2005-2012, under Prime Minister Meles Zenawi, Tedros was the Minister of Health. During his tenure, he covered-up one of the worst outbreaks of cholera in Ethiopian history. Between 2012-2016, he was the Ethiopian foreign minister and was involved in the violent suppression and starvation of the rival Amhara clan. A little known biographical detail about Tedros is that he was the 3rd ranking member of the politburo of the Tigray Peoples Liberation Front (TPLF) Terrorist Organization.

Image 1: Tedros, his FPLF linkage, and his full-time job as China’s propaganda mouthpiece

Tedros’s rapid rise to the top of the directorship of the WHO began after his collaboration with Bill Gates and the Clinton Foundation. Running some analytics on Tedros’s activity between 1991-2018 shows conduct riddled with fraud, corruption, the worst forms of human rights abuses, and scandals. 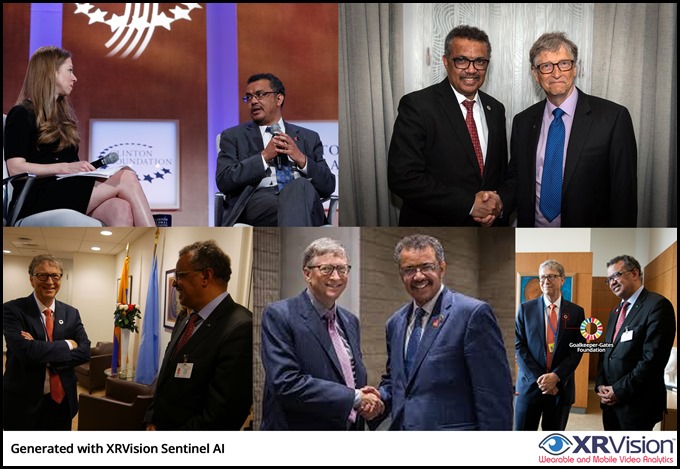 Image 2: Tedros with his power base 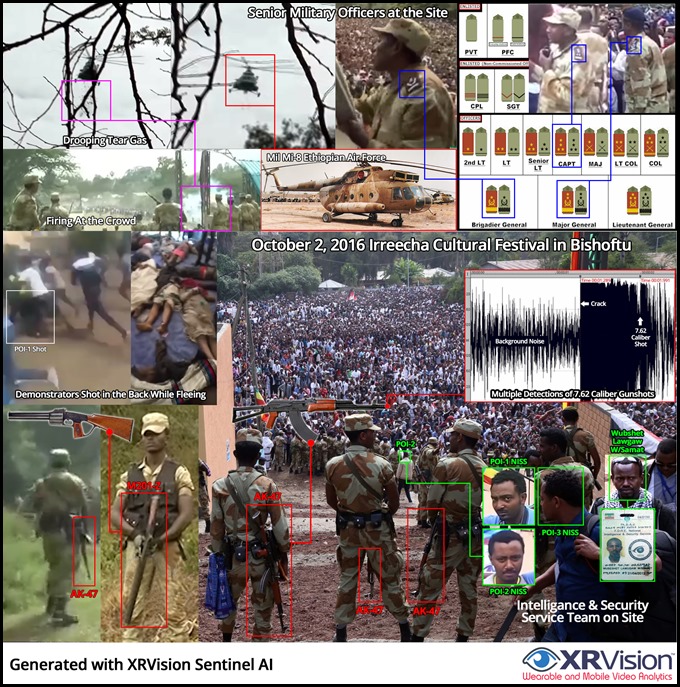 Image 3: Tedros lying about the Ethiopian police/army being unarmed and not firing and attacking the crowd at the Irreecha cultural festival in Bishoftu on October 2, 2016.  In an official 2016 Ethiopian Ministry of Foreign Affairs statement, Tedros wrote: “Indeed, it is quite clear from the videos that there was no shooting and the police were unarmed.”

Glaring character flaws and dishonesty aside, an interesting point of convergence between Tedros, China, and the Covid-19 pandemic is that Ethiopia received billions of dollars in Chinese aid over the past few years. Tedros has personally benefited from this aid in the form of several well-padded foreign bank accounts. In this context, it doesn’t take much effort to figure out why he advised Ethiopian Airlines to continue to fly daily from major Chinese cities. This is while 59 other air carriers from 44 different countries all grounded their flights to and from China. Ethiopian Airlines still insists that it will follow directives from the WHO and continue its daily China flights.

Image 4: HRC political office vs. donations to the Clinton Foundation. Tedros brokered a $100 million donation to the Clinton foundation. Within a few months, he became the director-general of the WHO. In 2017, Bill Clinton described Tedros as “one of the ablest public servants I ever worked with.”

In terms of the Chinese logistical involvement in making the epidemic a pandemic, it just happens that they financed and built the international airport in Addis Ababa. This airport is the ‘gateway’ for travel between China and Africa. It is also a major hub for European and US traffic. Ethiopia’s Bole airport sees, on average, 1500 passengers per day arriving from China. Just like in the case of the wide-open Ethiopian route, the same type of heavy china outbound passenger traffic to other locations continued long after they knew that the epidemic in Wuhan reached critical infection levels. 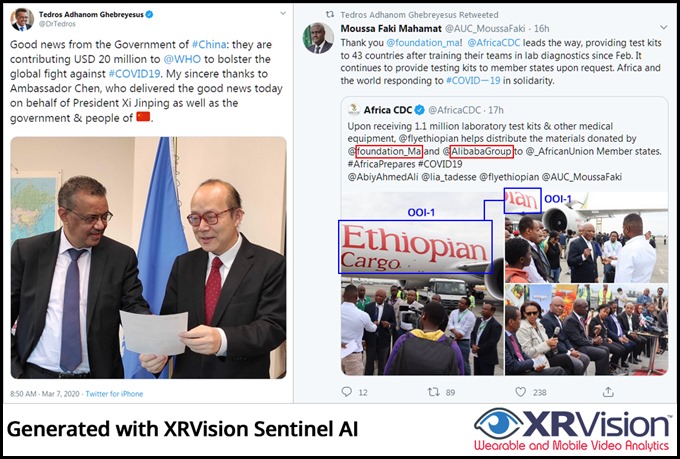 Image 5: Thank you China for ‘bolstering the fight against COVID19’, giving the MHO 20 million dollars, and providing its African clients with endless supply of PPE.

Any discussion about the emerging Chinese infodemic narrative, their research of a synthetic version of the Covid-19 virus, their US influence operations, and the WHO’s complacency in this pandemic should be viewed through these Tedros statements: 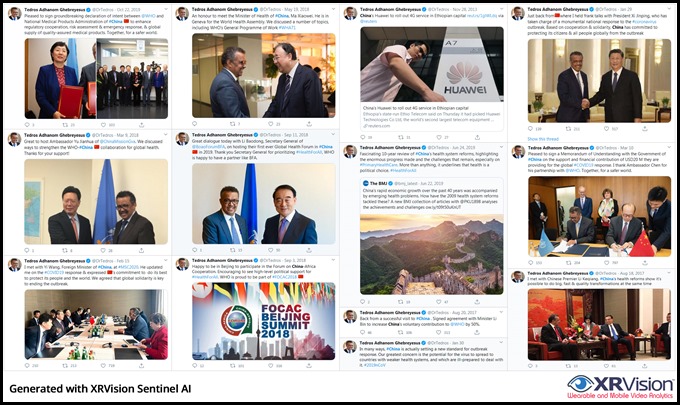 Where is the COVID-19 Messaging Coming From?
The majority of the aggressive narrative regarding the lethality of the Covid-19 pandemic and it’s apocalyptic nature is now coming from the WHO (they originally claimed no human transmission) and a related international network of progressive activists, politicians, big-tech, and reporters. A large number of these ‘activists’ are US based MSM journalists. Running some SIGINT on the sources of the messaging shows clear signs of 3C activity, timing, and a publication strategy. Not surprisingly, the main stated objective in many of these communications is the political targeting of the Trump administration. It is also noteworthy that some of these ‘activists’ include politicians, who have been discussing the need for the development of ‘scientific eye candy’ to help support the predictions of a zombie apocalypse.

If you still doubt that this is a coordinated campaign, here is a sampling of the massaging topics that the ‘Covid-19 network’ has generated over the past 10 weeks:

The following is a sampling of three profiles of members of the ‘Covid-19 network’ of contributors from outlets like WaPo, NYT, and the foreign media.

Brian Klass WaPo Reporter and Agent Saboteur Extraordinaire
Brian Klass is an American originally from Minnesota who lives and works in the UK. He is governor Mark Dayton’s former driver. Klass received his BA from Carleton College, a masters degree in Politics Science from Oxford, and his PhD in Comparative Government from Oxford. He has worked with Soros affiliated organizations and has ties to the British IC. He is a fellow in the department of global politics at the London School of Economics, an assistant professor of global politics at University College London, and a reporter for The Washington Post. 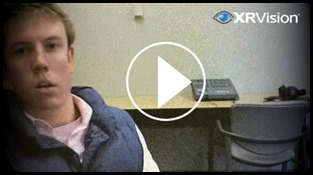 Image 7: Brian Klass in his own words

Klass knows several of the key players in the Steele Dossier such as Luke Harding and Ellen Nakashima (the reporter behind the allegation that the Russians hacked/leaked the DNC emails). Klass is a frequent television commentator and democratic political consultant, a US campaign adviser, and political analyst of US and foreign policy in mainstream media outlets like CNN, MSNBC, and CBS. He is an author of several anti-Trump books including: “The Despot’s Apprentice: Donald Trump’s Attack on Democracy”, the “The Despot’s Accomplice: How the West is Aiding and Abetting the Decline of Democracy”, and  the Co-Author of “How to Rig an Election”. 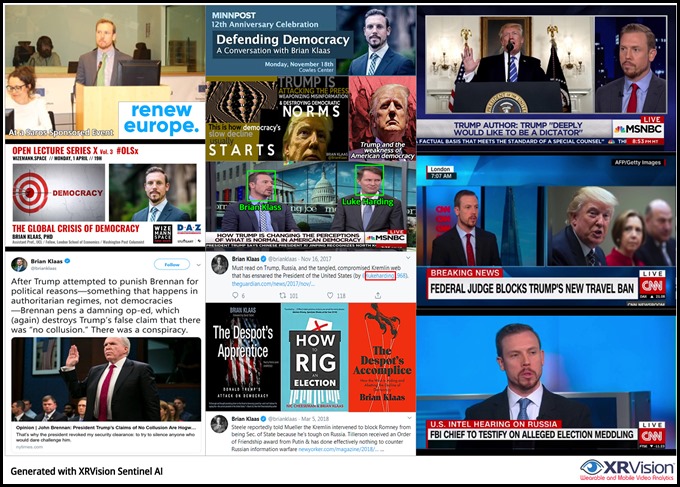 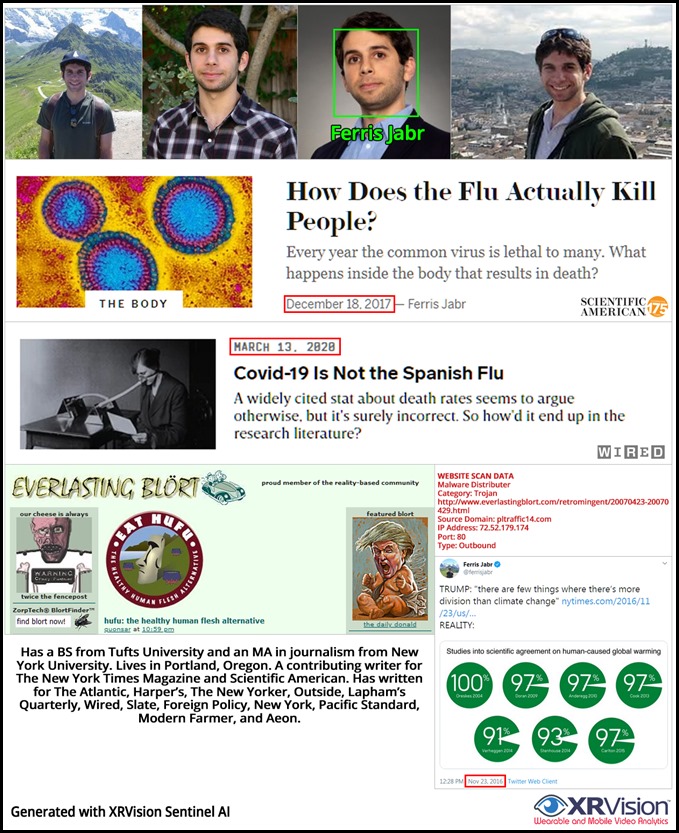 Image 9: The profile of Ferris Jabr, the ‘authority’ referenced in the February 2020 edits of the Wikipedia entry about the mortality rates of the Spanish Flu (changing them from 10%-20% to 1%-3%), thus, promoting the narrative that Covid-19 is as deadly as the Spanish Flu 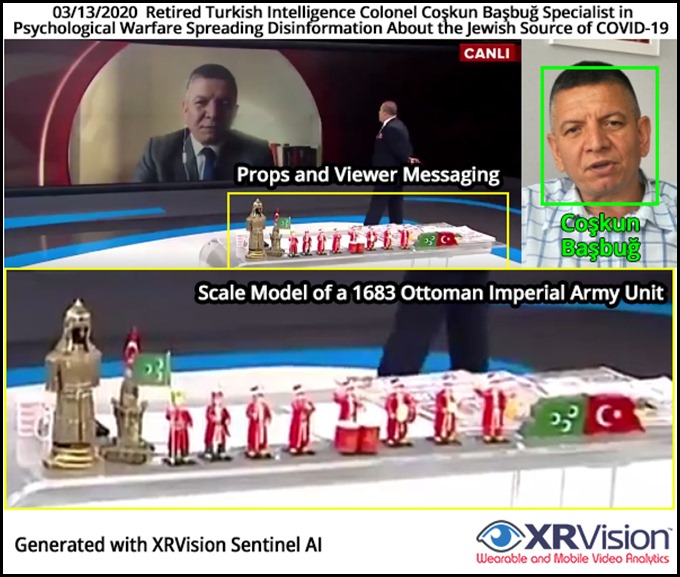 Image 10:
Coşkun Başbuğ, Retired Turkish intelligence Colonel specialist in psychological warfare in an interview on Turkish TV: “of course, Jews are behind this…”

I’ve received several requests for a proof that MSM outlets have coordinated the above mentioned ‘massaging topics’ well in advance. For example, that they would predict false astronomical death rates. The following is a posting by Chris Hayes, a lead reporter with MSNBC that predicts a 50% mortality rate. 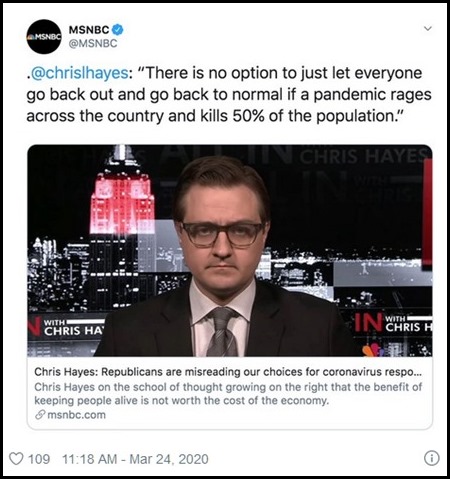 CBS This Morning’ video footage substitution fake. Using imagery from an ER in a hospital in Bergamo Lombardy in Northern Italy and passing it as footage of an ER in a New York city hospital in order to enhance the fear messaging. CBS senior editorial instructions were to ‘strip the Sky News logo from the footage’ so as not to expose its foreign source. The Sky News piece itself is also full of false claims like that the Covid-19 mortality rate is 50%. 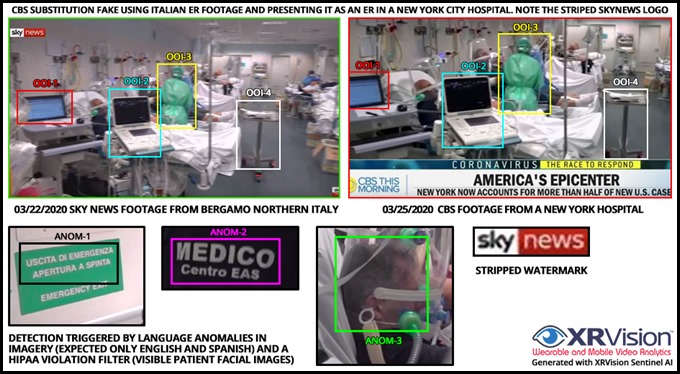 
America is a failed state (another item in the above mentioned massaging topics). The following is a sample posting by Julia Ioffe, a GQ Magazine reporter who posted a piece titled “Who’s the shithole country now?”. 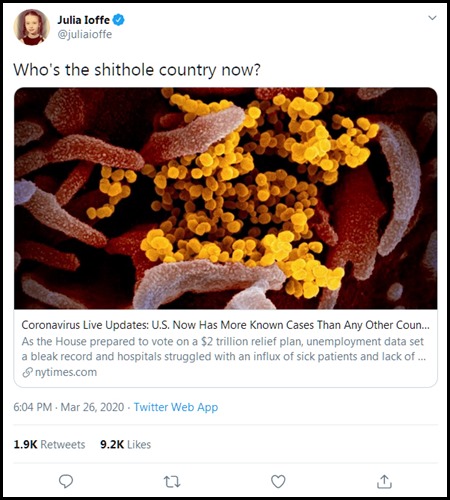 Wikipedia edits showing an alignment of the Spanish Flu with the Covid-19 mortality rates:

The global mortality rate from the 1918–1919 pandemic is not known, but an estimated 10% to 20% of those who were infected died (case-fatality ratio).”

136 thoughts on “When Tedros Moves His Lips, Beijing Speaks”