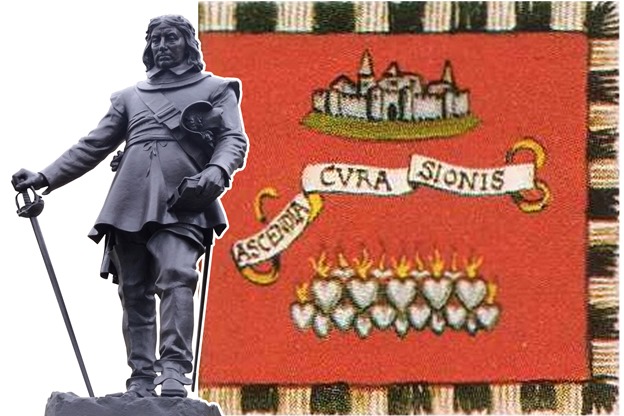 An Ironsides cavalry cornet flag with the inscription ASCENDIA [INCENDIA] CVRA SIONIS
“Ascend to the help of Zion” or “Burning with the desire to help Zion”.

The Soldier’s Pocket Bible was issued to Cromwell’s New Model Army in 1643. It came in pamphlet edition and was a condensed version of the Protestant Bible. The booklet octavo format was 5½” × 3″ in size, had 16 pages and a total of 150 war related verses from the Bible.

Cromwell’s soldiers, nicknamed “the Ironsides” in recognition of their fortitude kept the Pocket Bible in a buttoned pocket on the inside waistcoat—near the heart—under the outer leather buff coat. They would go into battle singing hymns like Psalms 46:7 “The Lord of hosts is with us, the God of Jacob is our Refuge.” 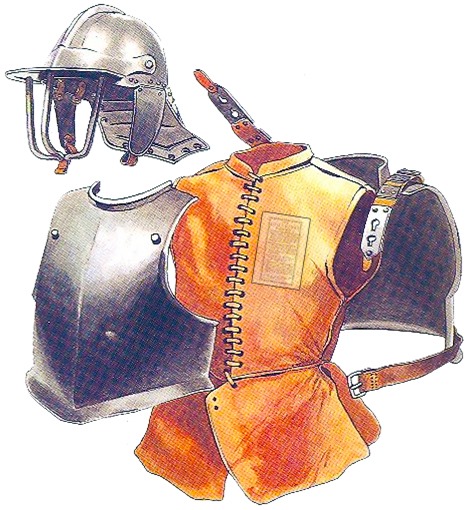 In an era where military leadership came from wealthy aristocratic families, Cromwell revolutionized the constellation of the parliamentary army by meritoriously appointing men of humble origin and strong Puritan convictions as officers in his cavalry regiment. These man, in turn, recruited similar minded individuals who eventually formed the core of the New Model Army.

Cromwell attributed his army’s almost unbroken chain of victories against the superior and better equipped royalist forces to their moral superiority and to G-d’s favorable intervention. In true biblical fashion, he lead cavalry charges himself and applied a strict ethical code to everyday conduct. At camp, the soldiers didn’t get drunk or gamble and were instructed in general to behave decently with orders such as:

“A Souldier must not doe wickedly”

Following strict, self imposed battlefield discipline, his soldiers did not rape, pillage, nor partake in the spoils of war. This is unusual considering the atrocities that other European armies were perpetuating on each other and inflicting on the civilian population during the contemporary Thirty Years’ War.

Image 2: Mass executions during the Thirty Years’ War – Jacques Callot: “The miseries and misfortunes of war”  The text reads: ‘Finally these infamous and abandoned thieves [soldiers who plundered and raped], hanging from this tree like wretched fruit, show that crime (horrible and black species) is itself the instrument of shame and vengeance, and that it is the fate of corrupt men to experience the justice of heaven sooner or later.’

Cromwell’s extraordinary practices and the quality of soldiers they produced weren’t confined to the English Civil War. As the English Puritans immigrated to America in the mid to late 1600s, they brought these ideals with them.

Fast forward the clock by 130 years to June 17th, 1775, the eve of the go/no-go engagement of the American revolution. Posted at Breeds Hill was one Francis Merrifield. Previously, Merrifield served with the New England Ipswich militia at Ticonderoga in the French and Indian War in 1759. After hostilities with England began in April 19th 1775, Merrifield was part of the force that pursued British soldiers retreating from the battles of Lexington and Concord. Just like the Ironsides of Cromwell’s day, he too carried his bible into battle, fighting as a sergeant at Bunker Hill in the company of Captain Nathaniel Wade in Colonel Moses Little’s regiment.

Merrifield inscribed his experience on the verso of the New Testament title page and on the inside back cover, thanking G-d for his safe deliverance from the battlefield and the details of his regiment and the serial number of his musket.

“1775. Cambridge, June 17th. A batel fought on bunkers hill, on Saterday in the afternoon, which lasted an hour and a quarter, two men were wounded, and … the number of my gun, one hundred eighty three, 183, the seventeenth Rigement, 17.“

“Cambridge, Jun 17 1775. I desire to bless God for his Kind aperince in delivering me and sparing my life in the late battle fought on Bunker’s Hill. I desire to devote this spared life to His glory and honour. In witness my hand, Francis Merrifield.“ 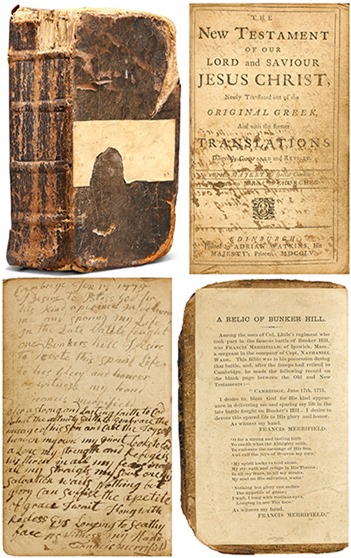 It is noteworthy just how far reaching Cromwell’s influence has been on the concept of ‘the citizen soldier’, a stable English parliamentary system, the American and French Revolutions, and the formation of every modern republic variant since.

We trace many of the revolutionary republican ideas to individuals such as Adams, Franklin, Warren, and Rousseau, but its easy to overlook the fact that the core concepts of this ideology such as taxation with representation are steeped in Cromwell’s social, religious, and political policies. It was Cromwell’s refusal to become a king that later inspired Washington to follow in his footsteps and go into retirement in 1797. It also inspired John Stark’s and Thomas Jefferson’s resistance to the American Cincinnatus movement, which they viewed as an imitation of the old-world inherited form of aristocracy. Subsequently, it was this mindset that enabled congress to set term limits on the presidency 150 years later in 1947.

Most of us also misattribute the natural rights of life, liberty, and property to John Locke. But Locke, was only a wee one year old baby (his father served as a captain in Cromwell’s cavalry) when Cromwell was already hard at work implementing what he termed “freeborn rights” which he defined as the G-d given rights that every human has at birth, as opposed to the rights bestowed on them by government or by human law. Echoing Cromwell sentiment, John Stark, just before the 1777 battle of Bennington told his troops that they were fighting for their “natural born rights as Englishmen”.

Without Cromwell’s successful challenge to the belief in the divine right of kings which he based on 1 Samuel 8:11-18 and the execution of Charles I, it is unlikely that King George III would have ever been challenged with the list of grievances and labeled a tyrant or that Luis the XVI would have been guillotined.

It seems that history has a well developed sense of Irony, during the English civil war, the royal party known as the cavaliers referred to Cromwell’s army with the derogatory term “roundheads”. This mucking nickname first described the soldiers, and then the whole Parliamentary party. The term arose from the puritan custom of getting buzz cuts. This was done to demonstrate their contempt for stylish hairdressing. This practice was in contrast to the long flowing hair styles of the royalist. Instead of getting offended, the parliamentarians embraced it. A roundhead, announced one pamphlet, was “a good, honest, zealous, and true protestant’, called by God to do his work.”

100 years later, in 1754, during the French Indian wars, the British came up with another coiffure related pejorative term “Yankee doodle” to describe the colonists of New England, insinuating that they were uncouth, low-class men lacking a sense of style and masculinity. The New Englanders, just like the roundheads, happily adapted the term and used it proudly.

Yankee Doodle is the tune
That we all delight in;
It suits for feasts, it suits for fun,
And just as well for fightin’.

Cromwell’s words about “A Souldier must not doe wickedly”  also aged well with the passage of time, almost 300 years after they were put down in writing, Colonel Theodore Roosevelt, the 26th president of the United States, wrote in his preface to the soldier’s bible:

“LOVE MERCY; treat prisoners well, succor the wounded, treat every woman as if she was your sister, care for the little children, and be tender to the old and helpless.”

The word indeed is mightier than the sword! 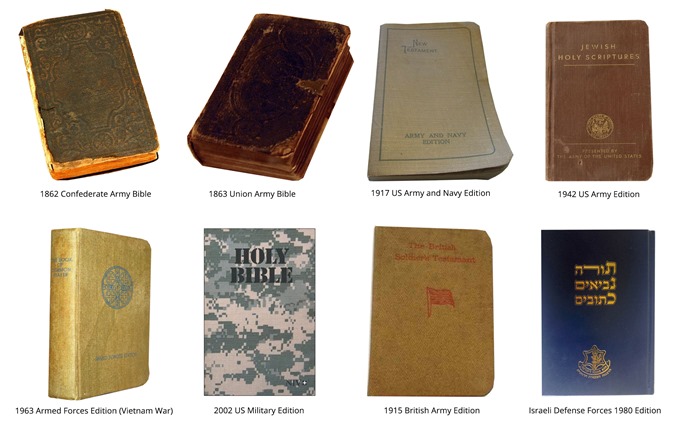 The following is a full copy of the original 1643 Soldiers Pocket Bible. The footnote section at the bottom of the post has a link to the printable PDF version. 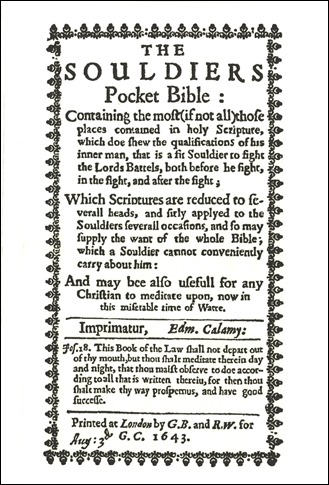 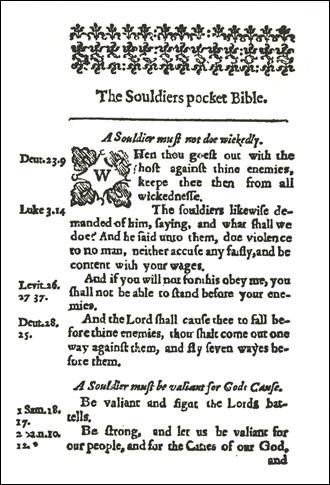 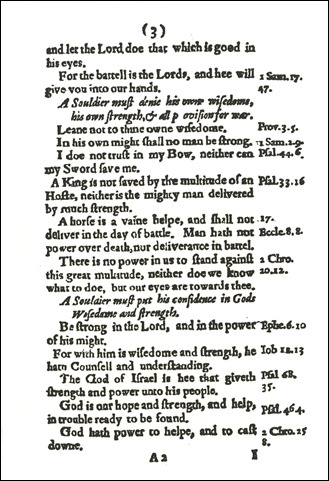 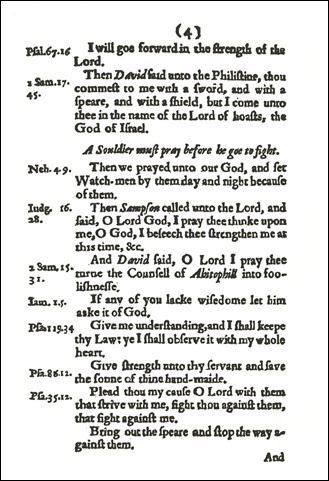 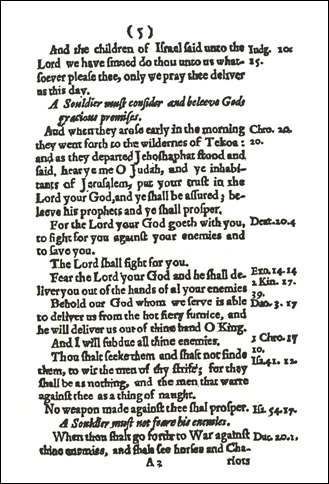 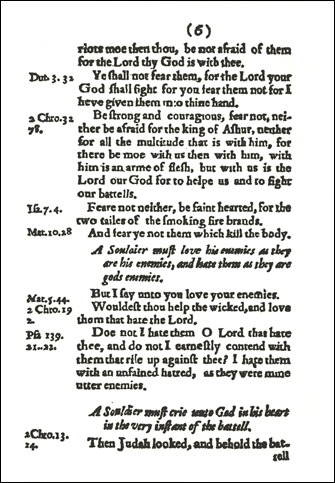 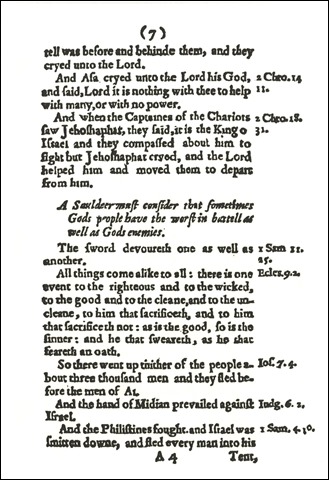 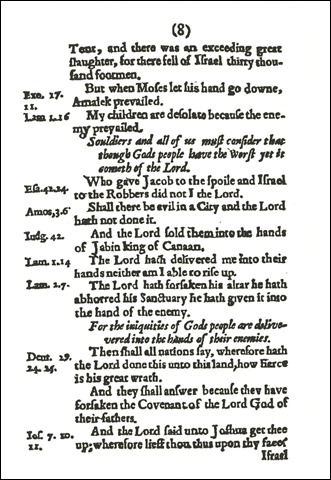 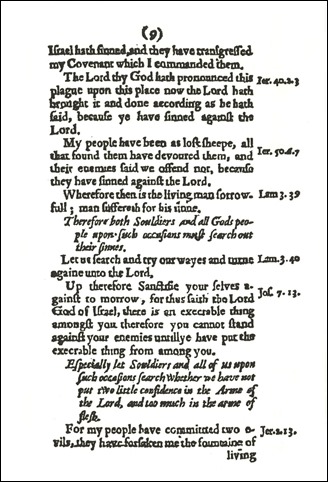 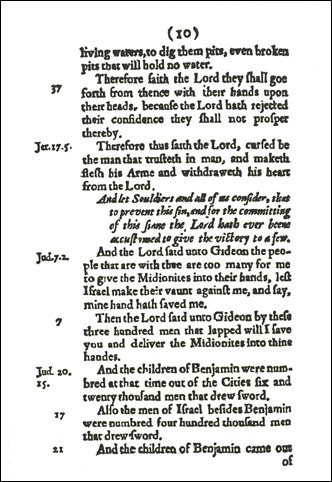 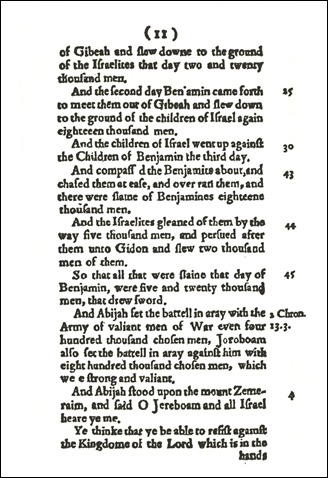 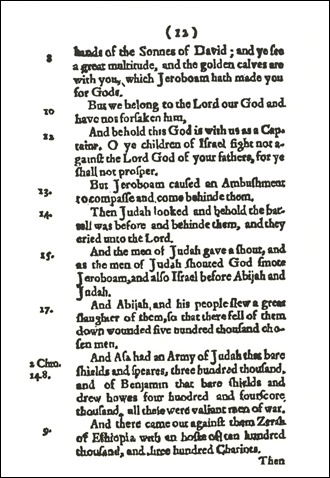 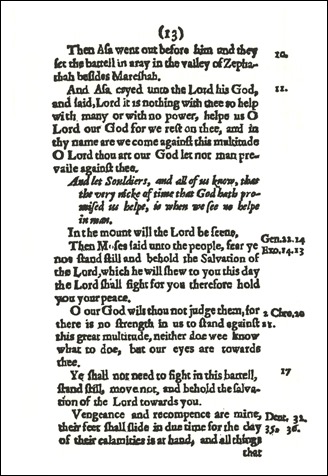 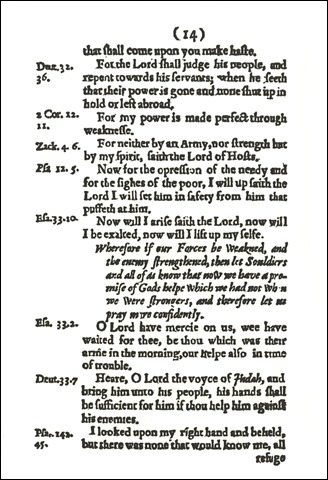 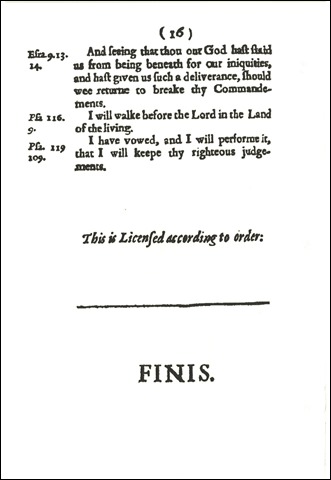 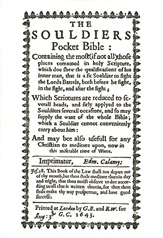 1861 Edition of The Soldier’s Pocket Bible – South Carolina Tract Society
The Soldier’s pocket Bible: issued for the use of the army of Oliver Cromwell. The Soldier’s pocket Bible, containing the most (if not all) of those places contained in Holy Scripture, which do show the qualifications of his inner man that is a fit soldier to fight the Lord’s battles, both before the fight, in the fight, and after the fight: which scriptures are reduced to several heads, and fitly applied to the soldier’s several occasions, and so may supply the want of the whole Bible, which a soldier cannot conveniently carry about him; and may be also useful for any Christian to meditate upon, now in this miserable time of war : with the soldier’s prayer, and battle hymn. 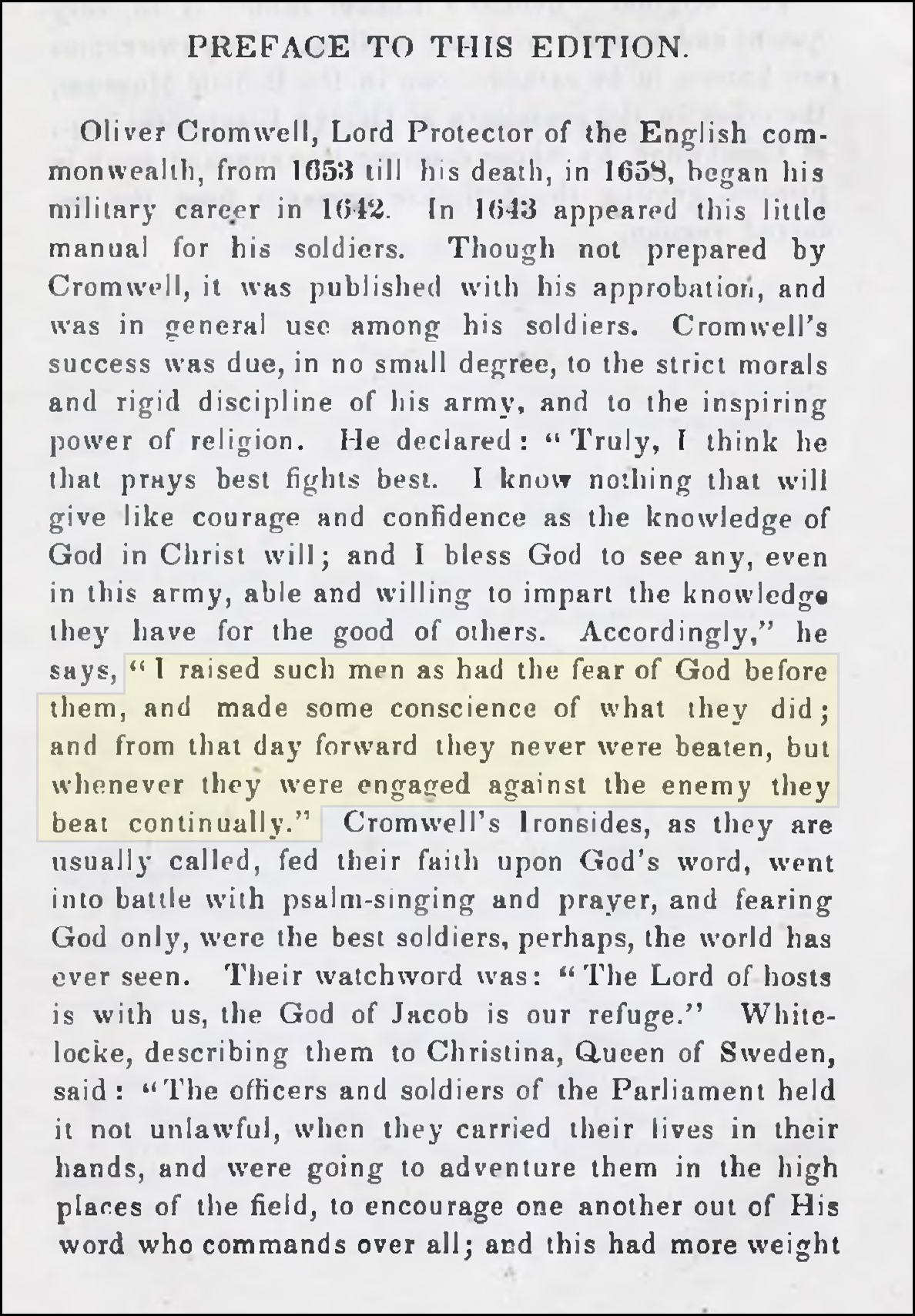 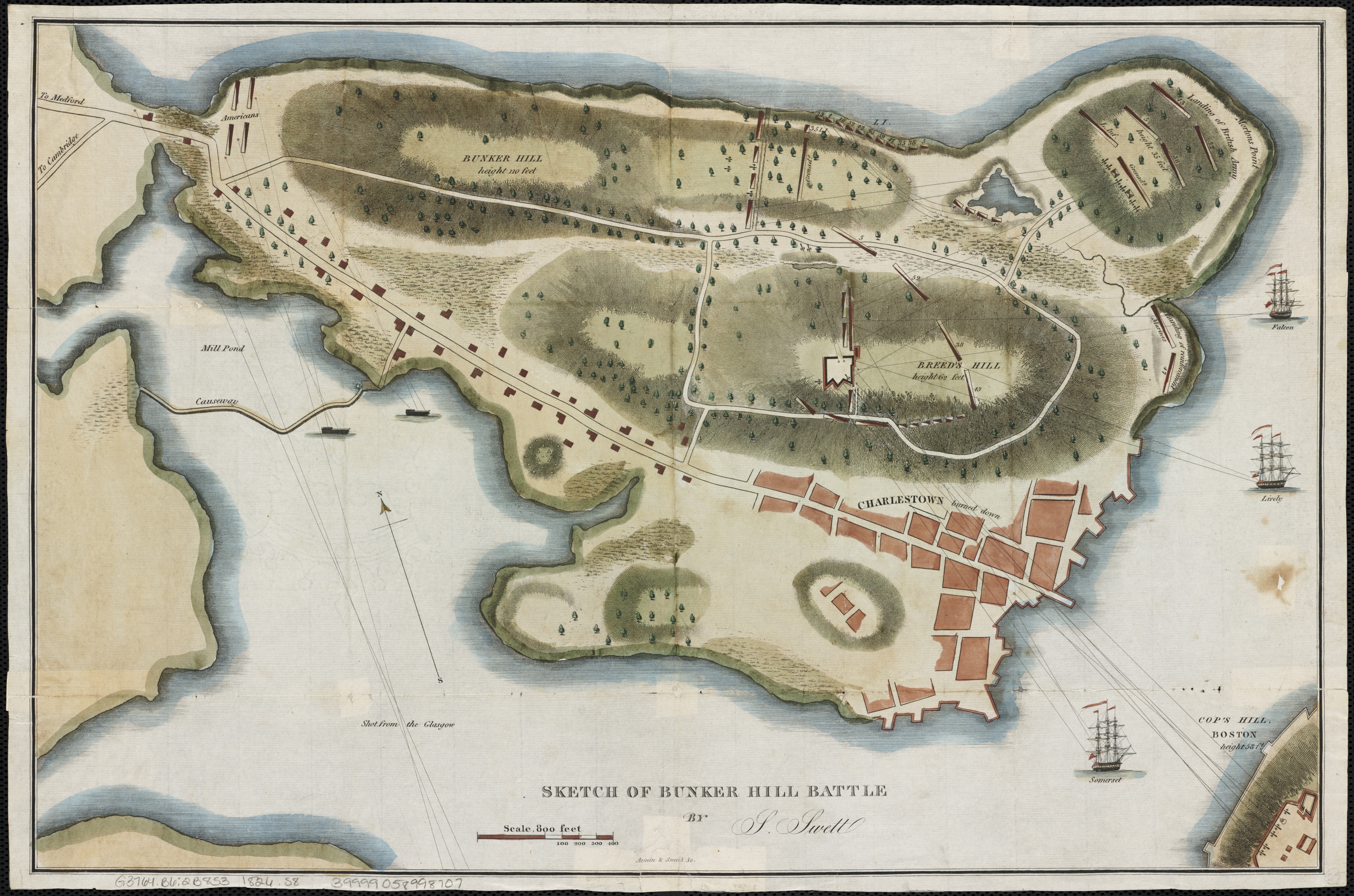 The Statue of George III – Journal of The American Revolution

Despising pomp and vain parade,
At home you stay, while France and Spain
The secret, ardent wish convey’d,
And hail’d you to their shores in vain:
In Vernon’s groves you shun the throne,
Admir’d by kings, but seen by none. 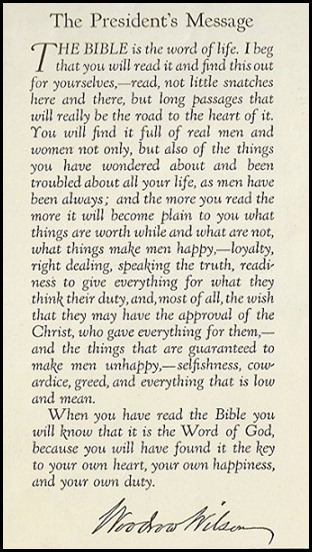 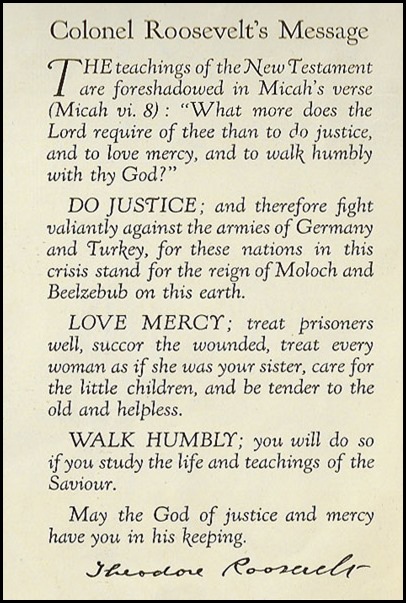 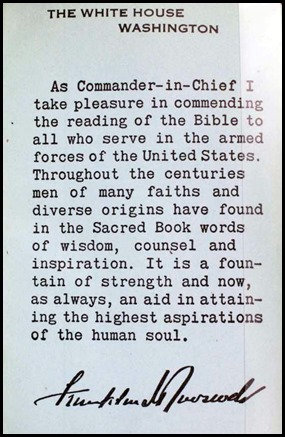 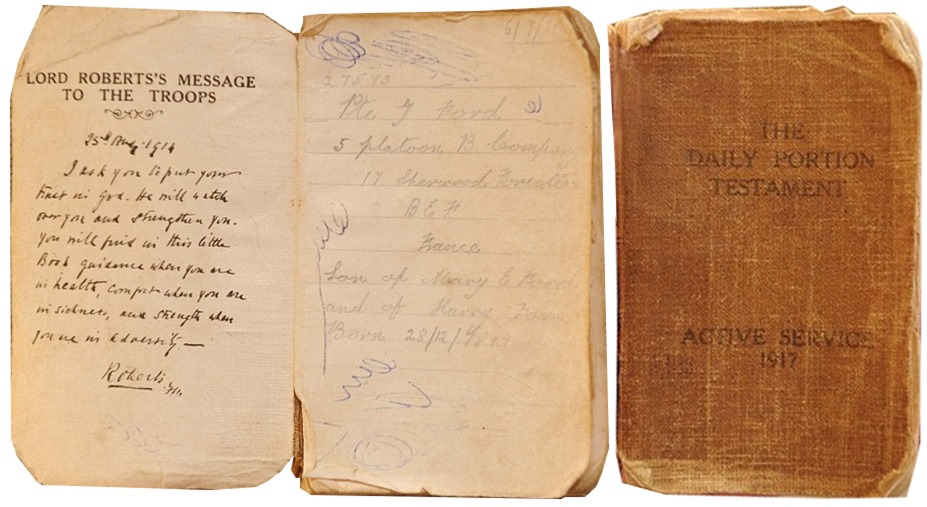 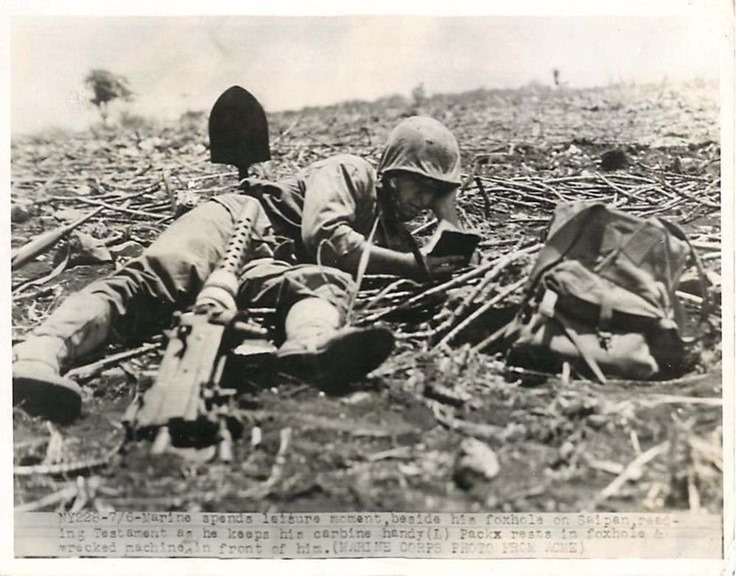 1944 US Marine in Saipan reading his pocket bible