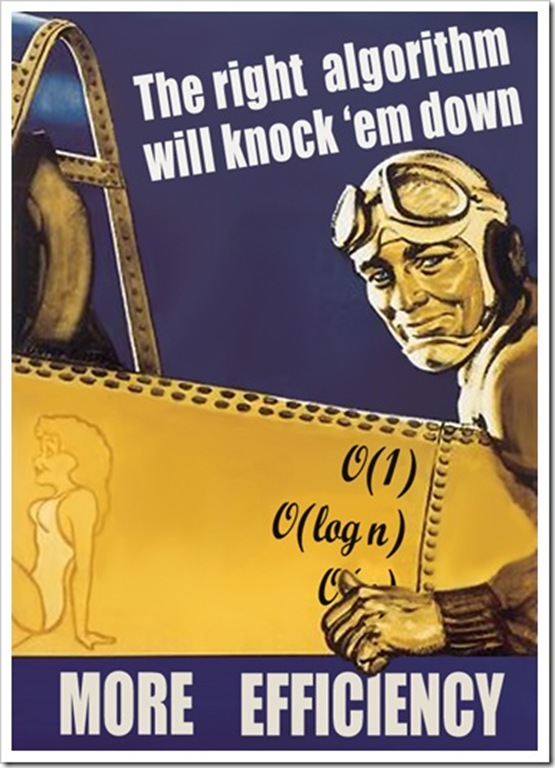 Recently, I was chatting with a friend of mine about pre-acquisition due diligence. Charlie O’Rourke is one of the most seasoned technical executives I know. He’s been doing hardcore technology for over 30 years and is one of the pivotal brains behind WU/FDC’s multi-billion dollar payment processing platforms. The conversation revolved around a method he uses for identifying processing bottlenecks.

His thesis statement was that in a world where you need to spend as little as you can on an acquisition and still turn profit quickly, problems of poor algorithmic implementations are “a good thing to have”, because they are relatively easy to identify and fix.  This is true, assuming that you have his grasp of large volume transactional systems and you are handy with complex algorithms.

In today’s environment of rapid system assembly via the mashing of frameworks and off-the shelf functionality like CRM or ERP, the mastery of data structures by younger developers is almost unheard of.

It’s true, most developers will probably never write an algorithm from scratch. But sooner or later, every coder will have to either implement or maintain a routine that has some algorithmic functionality. Unfortunately, when it comes to efficiency, you can’t afford to make uninformed decisions, as even the smallest error in choosing an algorithm can send your application screaming in agony to Valhalla.

So if you have been suffering from recursive algorithmic nightmares, or have never fully understood the concept of algorithmic efficiency, (or plan to interview for a position on my team), here is a short and concise primer on the subject.

Best or Bust:
An important principal to remember when selecting algorithms is that there is no such thing as the “best algorithm” for all problems. Efficiency will vary with data set size and availability of computational resources (memory and processor). What is trivial in terms of processing power for the NSA, could be prohibitive for the average company.

Efficiency:
Algorithmic efficiency is the measure of how well a routine can perform a computational task. One analogy for algorithmic efficiency and its dependence on hardware (memory capacity and processor speed) is the task of moving a ton of bricks from point A to point B a mile a way.  If you use a Lamborghini for this job (small storage but fast acceleration), you will be able to move a small amount of bricks very quickly, but the down side is that you will have to repeat the trip multiple times. On the other hand, if you use a flatbed truck (large storage but slow acceleration) you will be able to complete the entire project in a single run, albeit at slower pace.

Notation:
The expression for algorithmic efficiency is commonly referred to as “Big O” notation.  This is a mathematical representation of how the algorithm grows over time. When plotted as a function, algorithms will remain flat, grow steadily over time, or follow varying curves. 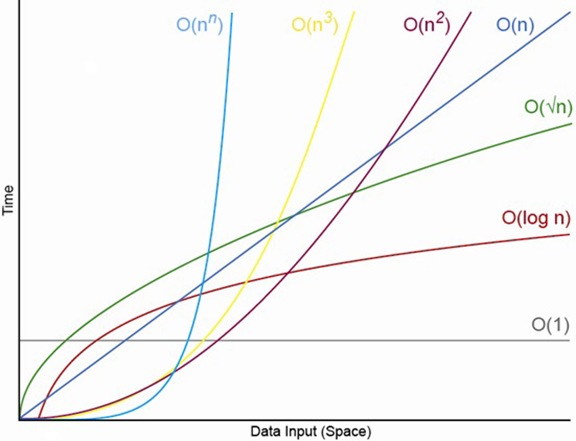 O(1)
Performance is constant for time (processor utilization) or space (memory utilization) regardless of the size of the data set size. When viewed on a graph, these functions show no-growth curve and remain flat.

O(1) algorithm’s performance is also independent of the size of the data set on which it operates.

An example of this algorithm is testing a value of a variable based on some pre defined hash table.  The single lookup involved in this operation eliminates any growth curves.

O(2N) or O(10 + 5N) denote that some specific business logic has been blended with the implementation (which should be avoided if possible).

O(N+M) is another way of saying that two data sets are involved, and that their combined size determines performance.

An example of this algorithm is finding an item in an unsorted list or a Linear Search that goes down a list, one item at a time, without jumping.  The time taken to search the list gets bigger at the same rate as the list does.

O(nn)
Performance will be directly proportional to the square of the size of the input data set.  This happens when the algorithm processes each element of a set and that processing requires another pass through the set (this is the square value). Processing a lot of inner loops will also result in the form O(N3), O(N4), O(Nn.).

O(2N)
Processing growth (data set size and time) will double with each additional element of the input data set. The execution time of O(2N) can grow exponentially.

The 2 indicates that time or memory doubles for each new element in data set.  In reality, these types of algorithms do not scale well unless you have a lot of fancy hardware.

Generally, log N implies log2N, which refers to the number of times you can partition a data set in half, then partition the halves, and so on.  For example, for a data set with 1024 elements, you would perform 10 lookups (log21024 = 10) before either finding your value or running out of data.

The important thing to note about log2N type algorithms is that they grow slowly. Doubling N has a minor effect on its performance and the logarithmic curves flatten out smoothly.

An example of these type of algorithms are Binary Search, Heap sort, Quicksort, or Merge Sort

Scalability does not equal efficiency. A well-coded, O(N2) algorithm can outperform a poorly-coded O(N log N) algorithm, but this is only true for certain data set sizes and processing time. At one point, the performance curves of the two algorithms will cross and their efficiency will reverse.

What to Watch for when Choosing an Algorithm
The most common mistake when choosing an algorithm is the belief that an algorithm that was used successfully on a small data set will scale effectively to large data sets (factor 10x, 100x, etc.).

For most given situations, an O(N2) algorithm like Bubble Sort will work well. If you switch to a more complex O(N log N) algorithm like Quicksort you are likely to spend a long time refactoring your code and will only realize marginal performance gains.

If you are looking for some entertainment while learning the subject, check out AlgoRythimic’s series on sorting through dancing.