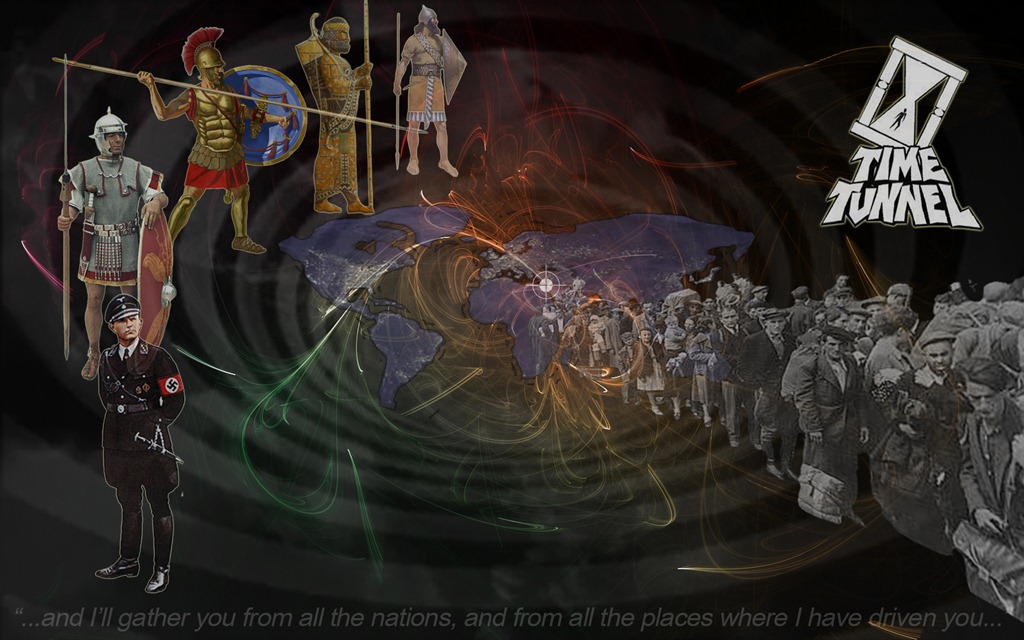 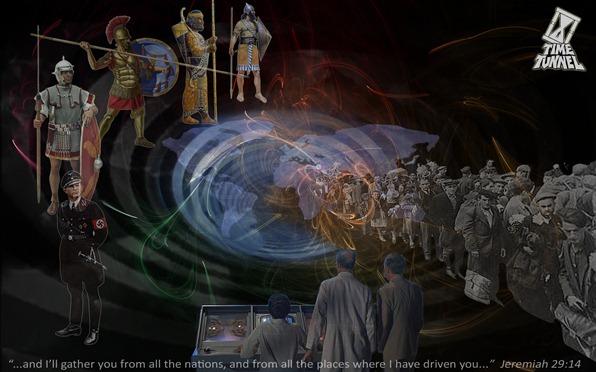 Among the most prominent themes in the Hebrew Bible are the concepts of sin, punishment, repentance, and restoration. Chapter 28 of the book of Deuteronomy, known as the “blessing and curse”, makes it abundantly clear what the rules of the game are. Follow the law and you will enjoy fantastic entrepreneurial success and overflowing prosperity. Disobey it, and you’ll be punished with the worst forms of war, exile, anarchy, and poverty.

The following two promises illustrate the inverse relationship of the biblical punishment and restoration concepts:

…and there you will serve other gods, which you have not known, nor your fathers, even ones made of wood and stone.

… and I will end your captivity, and gather you from all the nations, and from all the places whither I have driven you, said the LORD.

…and the LORD shall be King over all the earth; in that day shall the LORD be One and His name one.

I chose to use the example of the exile from/return to the Promised Land as an illustration because it seems to have been executed with meticulous precision for over 2700 years. Being a software engineer, I can’t help but look at a promise of punishment and restoration that spans such a long period of time and not see a long-running transaction.

In software design, we use the term ‘long-running transaction’ to describe a job that may need to run for an extended time and survive various failure conditions like system reboots and lack of connectivity. These processes might also have long periods of inactivity between consecutive events, so they just sit and wait for days, weeks, or months at a time.

Keeping this in mind, we can begin our historical tour of one of the longest-running transactions in history and how it unfolded throughout the centuries.

The Jewish mass exiles from the holy land begins in 740 BCE. After repeated threats and prophecies foreshadowing impending doom, the Assyrian king Tiglath-Pileser III, arrives to the Northern Kingdom of Israel and exiles the tribes of Reuben, Gad, and the half of the tribe of Manasseh (I Chronicles 5:26).

In 722 BCE, it is the turn of Samaria, the capital of the Northern Kingdom. After a three year siege, Samaria is captured by Sargon II and Shalmaneser V, each of whom, in turn, proceeds to exile first 27,290 inhabitants of Samaria and then ten of the twelve tribes of Israel. Those ten later came to be known as the Ten Lost Tribes. (2 Kings 17:24).

In 701 BCE, twenty years later, Sennacherib leads a military campaign against Judea, which results in the exile of 200,000 Israelites (2 Kings 18:12 and Taylor Prism).

Now fast-forward the time machine by 100 years, to 597 BCE.  The Assyrian empire has just been replaced by the Babylonian.  With new regional management comes a new round of exiles. This time it’s king Nebuchadnezzar II who is the divine “messenger”. Jerusalem, the capital of Judea, is put under siege and eventually falls resulting in the destruction of the First Temple in Jerusalem and the exile of 50,000 people to Babylonia (2 Kings 25:21).

By 520 BCE, only 70 years later, the Babylonian empire has gone the way of all empires and the new superpower, Persia, permits the exiles to return to Judea and rebuild the Second Temple.

In 334 BCE, it’s the Persian empire’s turn to meets its maker. Judea now falls under the rule of Alexander the Great. By 167 BCE, his empire is broken to there separate kingdoms and one of his successors, the Seleucid king Antiochus IV Epiphanes, pursues a zealous Hellenizing policy against the Jews which leads to the Maccabean Revolt. In the space of three days, 40,000 people are killed in Jerusalem, and the same number is exiled and sold into slavery. (2 Maccabees 5:11–14).

By 6 CE, the Seleucid empire goes up in smoke and Judea became a province of the Roman empire. In 66 CE, due to a combination of religious and political factors, a full -blown revolt is launched against Rome. This war, known as the First Jewish–Roman War, lasts for about 7 years and ends in the destruction of Jerusalem and the Second Temple. According to Josephus, around 1,000,000 people are killed, and as many as 100,000 are exiled and sold into slavery. The exiled slaves and gold that was stolen from the temple finances major public works in Rome, including the Colosseum.

Through their iron fist policy, the Romans keep Judea quiet for another 40 years. Then in 115 CE, the Second Jewish-Roman war breaks out.  Known as the Kitos War or the rebellion of the diaspora, the war lasts for about two years and results in the depopulation of many Jewish communities in places like Cyprus, Cyrene (modern-day Libya), Alexandria, and thousands of exiles.

Pax Romana works for another 15 years. Then in 132 CE, the emperor Hadrian decides to rename Jerusalem “Aelia Capitolina” and to prohibit circumcision. This leads to the Third Jewish-Roman War, also known as the Bar Kokhba Revolt. The war lasts for 4 years.  The outcome is almost the complete devastation of Jewish life in Judea. According to the Roman historian Cassius Dio, 580,000 Jews were killed and thousands exiled.

In a final attempt to suppress any future Jewish revolts, Hadrian burns the Torah scrolls at the former Temple sanctuary and places two statues there: one of Jupiter and one of himself.

To eradicate any memory of Judea or Israel, he also wipes the name “Judea” off the official Roman maps and replaces it with “Syria Palaestina” (after the Philistines).

This strategy works for about 120 years. Then in 351 CE, a revolt brakes out against emperor Gallus.  After a short war, Tiberias, Diospolis, and Diocaesarea, the centers of the rebellion, are razed to the ground. Ursicinus, the Roman general in charge, orders thousands to be killed, enslaved, and exiled.

260 years passes, and the empire is now under Byzantine management when a Jewish revolt

brakes out against emperor Heraclius. The war ends in about 626 and is followed by a wide scale massacre of the Jewish population throughout Jerusalem and Galilee, and the exile of tens of thousands.

By 628 CE, it’s the end of the road for the Byzantine empire. The Jewish population in Judea under Muslims rule continues to shrink for about 400 years and eventually in 1099 CE, culminates in the Crusades during which most of the Jewish population left in the land is either killed or exiled.

This pattern continues during the Middle Ages, Renaissance, and up until as late as the 20th century. Some of the expulsions are massive, such as the one in Spain in 1492 that effects 800,000 people. Others are smaller and impact a single city or several hundred individuals.  But nevertheless, The Jewish communities everywhere were constantly involuntarily on the move.

A quick sampling of European expulsions between 1495-1597 shows 23 such events.

Between 1941 and 1945 across German-occupied Europe, the Nazis, aided by local collaborators, murdered systematically over six million Jews, around two-thirds of Europe’s Jewish population. The murders were carried out in pogroms and mass shootings; by a policy of extermination through labor in concentration camps; and in gas chambers and gas vans in German extermination camps.

By 1947, 2700 years have passed since the first Assyrian exile. The original prophesy in Deuteronomy 28:64 of “I’ll scatter you among all people… from the one end of the earth unto the other end of the earth” has now been fulfilled.

So, you are probably thinking to yourself: “This history of exiles and expulsions is interesting, but where is the proof of the inverse prophesy?” (Remember? The one about gathering the exiles from the far reaches of the earth and bringing them back to Zion and the universal recognition of the one nature of G-d).

In what looks like the self-reassembly scene from the Iron Giant, over the past 130 years, the decedents of the exiles are finally starting to make their way back home. By 1948, against all the odds, the State of Israel is re-established, the land is reclaimed, and Hebrew, as a spoken language is resurrected.  Furthermore, consider the stories of some of the returning exiles, a remote and what are apparently completely unrelated groups like: Beta Israel, Bnei Menashe,  Bene Ephraim, Bene Israel, Pashtun, ye-Ityoppya Ayhudi, Bakwa Dishi, The Lemba people, and Kaifeng. All of these have an oral traditions that claim that they are the descendants of the Judean exiles or the ten lost tribes.

What about the universal recognition of the “one nature of G-d” prophesy? This one takes the cake! Check out the video below, recorded in a remote village in Papua New Guinea. It shows the native community reciting one of the oldest biblical affirmation prayers about the unity of G-d.

The words for this song come from the text found in Deuteronomy 6:4:

Hear, O Israel: the LORD our G-d, the LORD is one

For Jews, it is considered the single most important passage in the Hebrew Bible, and it has been recited as part of the daily prayer routine for over 3,000 years, long before the first exile ever took place.

Deuteronomy 4:34
”…has any god ever attempted to go and take a nation for himself from the midst of another nation, by trials, by signs, by wonders, and by war, by a mighty hand and an outstretched arm, and by great deeds of terror, all of which the Lord your God did for you…?”