A number of internet researchers and reporters have asked me to evaluate some of the imagery and files that are being distributed by one George M. Nasif through his Twitter, Facebook, and website. Nasif claims to possess vast amounts of proprietary DOJ, diplomatic, intelligence community, and law enforcement records, in addition to donor credit card payments and a variety of classified emails. Nasif, who promotes himself as a network security specialist has significant presence and engagement on SM. His Twitter network alone has over 17K followers and its growing. 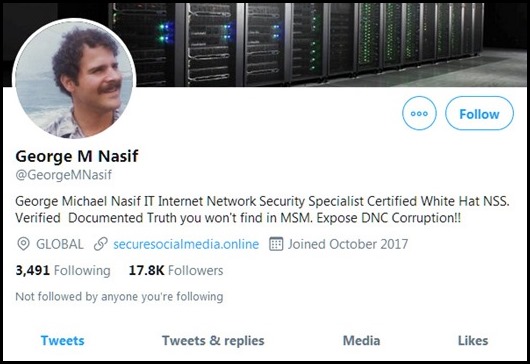 George Nasif, AKA George Michael Nasif, makes a lot of bold claims about the esoteric sources of his data and his deep knowledge and insight into current events. These claims seem to resonate well with his followers and influence network. A typical posting that promotes his content includes statements like:

“My Server files on the gangsters of the Obama admin. over 2 million documents. 3 Terabytes of information. Has now more than doubled to over 6 TB of files” 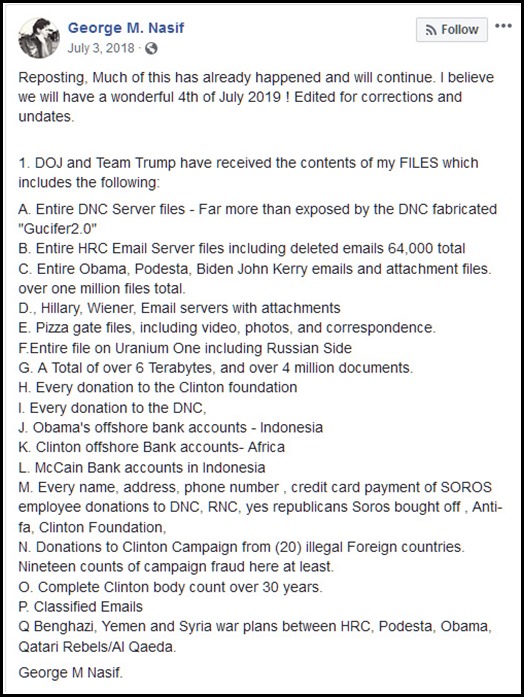 Running some analytics on Nasif’s depositories (some of which are housed in a public DropBox archive) reveals that almost all of his data and images were scraped from various forums, websites, and social media outlets. None of the examined data is proprietary in any way nor was it obtained recently. Also, contrary to his claims, his data set doesn’t even come close to 6 TB or millions of files.

The following image illustrates the data sources found on Nasif’s site. This screenshot is a Nasif snippet from a flight log on Jeffery Epstein’s Boing 727-31 TN N908JE showing Bill Clinton on the passenger list. This document was originally disclosed as part of the Epstein v. Edwards lawsuit in 2009, it was collected by Nick Bryant and published by John Cook via Gawker.com. 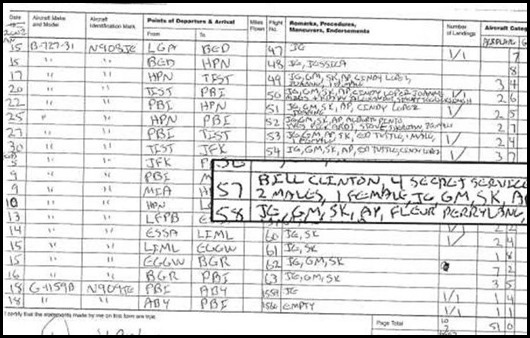 Nasif however, doesn’t provide a direct link to this source document nor does he credit John Cook and Nick Bryant. Instead, as can be gleaned from his tweet below, he implies that his depository may just be the only remaining source for this information, which is clearly not the case.

Image 4: “This might be the only archive left in existence.” Nasif, obfuscating the real sources of the data in his ‘proprietary’ archive or claiming that he (Team George) is the source. 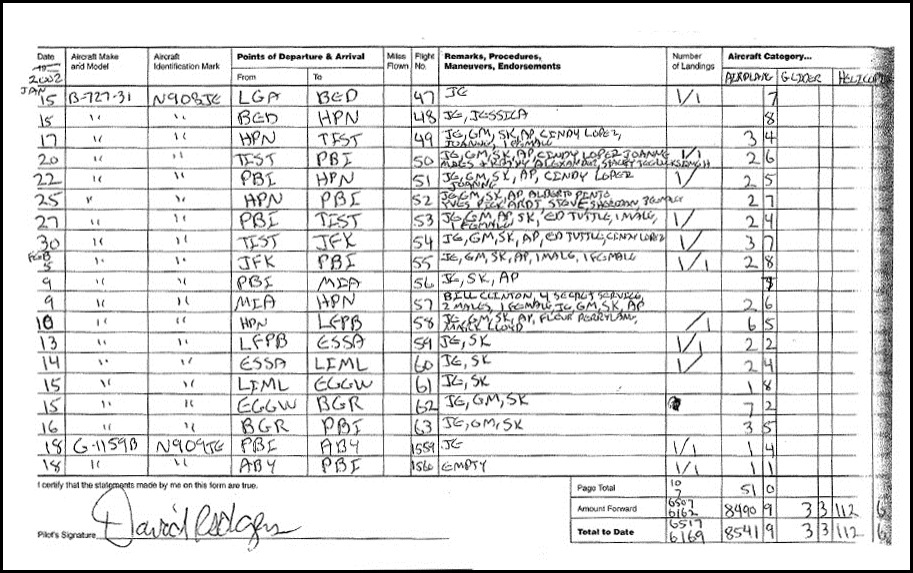 Image 5: One example of the source of George Nasif’s “proprietary” data depository (this is the source of of Nasif’s snippet seen in Image 2)

Beside the misattribution and hiding the real sources of his data, many of the images in his depository show evidence of touch-ups and post editing (it’s unclear by whom). The images have the wrong authorship attribution and their labels have misleading descriptions of the content. Many of the screenshots of the documents also exhibit font type and resolution mismatches, suggesting that the text on some of the images was retyped after they were produced. 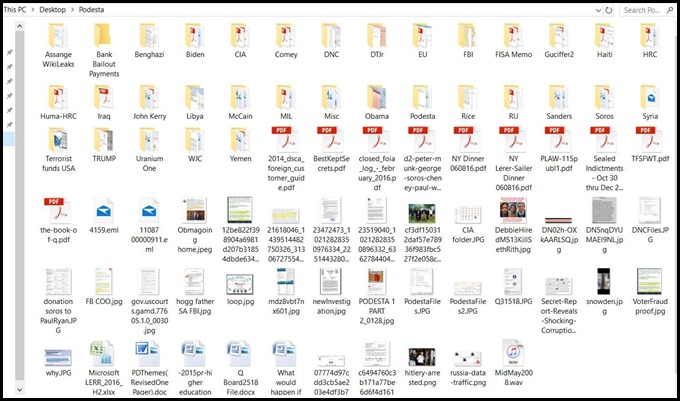 Image 6: Some of the ‘proprietary’ content advertised by George Nasif in his DropBox

The logistics behind Nasif’s > 6TB cloud based archive raise questions about his ability to float such an enterprise as a non-revenue service. IBM CDN cloud storage goes for $0.02-$0.085 per GB. Doing a quick math, shows that at these rates, Nasif could be spending an upwards of $100-$700 USD a month on storage alone and that doesn’t include the bandwidth cost for streaming all of the conspiratorial video files.

His claims about having pedophilia related images and records (the AI flagged several) are problematic to say the least. Beside the moral issues with possessing, posting, trading, and directing others to access this content, there is also the small problem of breaking federal and sate laws. His references to having personal and company financial data such as passport numbers, credit card numbers, bank accounts, and other PII data, could result in multiple felony charges for him and for anyone who has a copy of these records. Also, publishing this information (as he claims to have done) could be prosecuted under state doxing laws. If his public records do indeed contain names, addresses and phone numbers of federal employees, he and whomever downloads this data could also be potentially prosecuted under 18 USC § 119.

In terms of Nasif being a subject matter expert and uber-communicator, his writing style exhibits habitual poor grammar, punctuation errors, spelling, and capitalization issues—the hallmarks of an author not accustomed to technical writing. His claim of being an “IT Internet Network Security Specialist Certified White Hat NSS” is also dubious as his professional career mostly revolved around house painting. He has a zero industry security footprint, he has very limited technical vocabulary, and he exhibits a poor grasp of even basic computer security concepts. His professional network and background also fail to show any traces of Information security experience to back up many of the cybersecurity interpretive claims and ‘big’ statements. 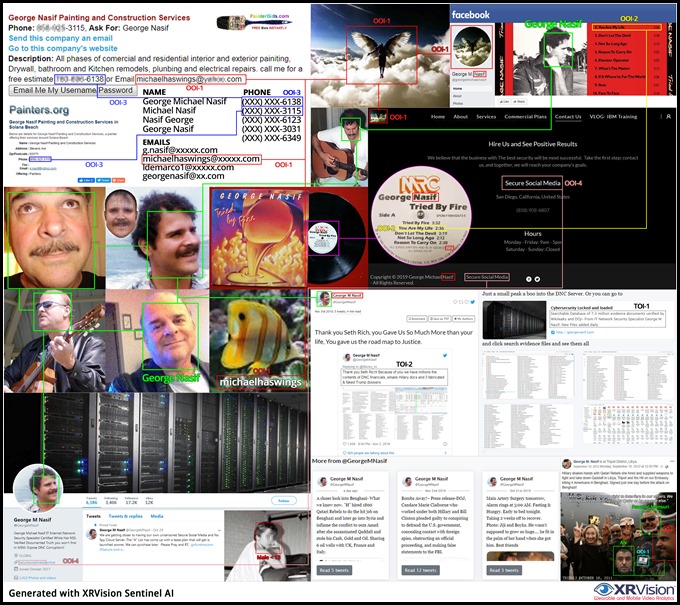 Based on Nasif’s lack of technical proficiency and a reasonable explanation of how he has gotten access to the ‘proprietary’ materials, it seems that he is just an opportunistic shadowy data broker who scrapes dubious content from 3rd parties, tags it with provocative titles, and makes sensational headline style claims about its meaning. It may also be relevant that him becoming a purveyor of ‘secret’ intelligence suspiciously coincides with the 2017-2018 GoFundMe launch of his web hosting service (re-selling IBM hosting) which, interestingly, also uses similar bombastic claims such as:

If you need further evidence about the nature of this depository, read Nasif’s Read First NOTICE TO ALL VIEWERS:

“…Please do not publish any of my evidence documents in public or private forums without my written permission. Please do not try to “share” a link to my evidence file folders from this drop box folder to social media pages, groups, or news publications. If you publish anything labeled “Secret” in public, I cannot protect you from legal or criminal prosecution that may follow.

If you want to invite someone to view “George Global” please make that request by email to g.nasif@yahoo.com and make sure that person has followed protocol by first making a donation to the new server so I can give them access. Posting many of these documents is what got me banned 15 times from Social Media, Twitter and FB. Remember this when RT or sharing on FB. Think before you act. Be responsible. All Documents have been vetted as factual and true evidence from the source.”

So, there you have it. You shouldn’t publish any of Nasif’s documents without his permission because he scraped them from 8chan/8kun/4chan and other conspiracy watering holes and now claims them as his IP. But if you do re-publish anything labeled “Secret” from his publicly accessible DropBox archive, he won’t be able to protect you from “legal or criminal prosecution”. Also, don’t forget to ‘donate’ to his business venture in order to get access to the ‘full’ content in this magical archive (which previously was in the public domain). And finally, Nasif himself assures you that he “vetted as factual and true evidence” over 6 TB of data and millions of records.

If you are still struggling with the classification of the content in Nasif’s depository/postings as real or fake, the highly technical illustration below may be of some help. 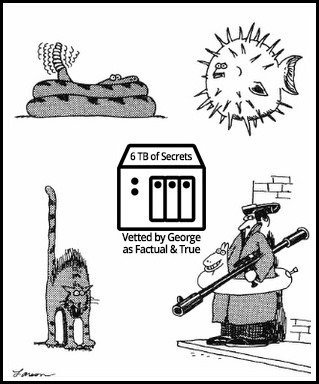 22 thoughts on “The Rise of the Shadow Data Brokers”