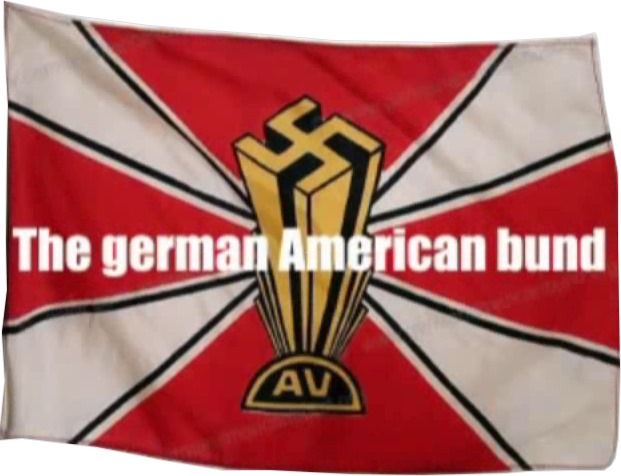 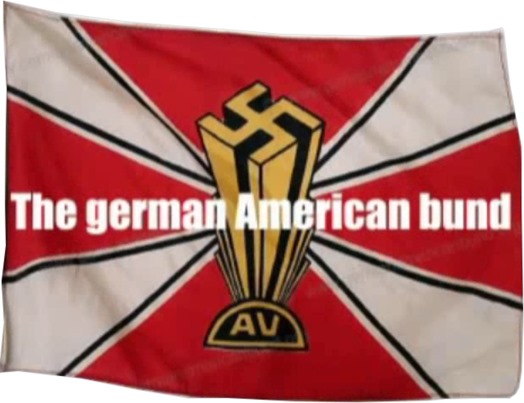 On February 20, 1939, over 20,000 American supporters of the Nazi party packed Madison Square Garden in New York City. They anxiously awaited the appearance of Fritz Julius Kuhn, the newly anointed Führer of the German−American Bund. The event took place two days before George Washington’s birthday and a 30−foot-portrait of the first president (who was described by Kuhn as the first fascist) hung behind the podium along with Nazi flags and swastikas. 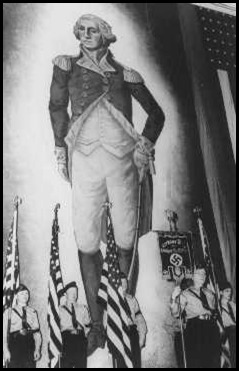 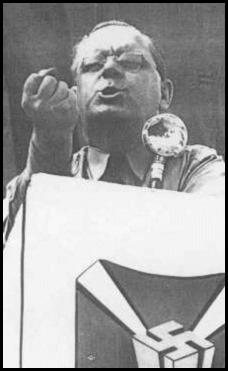 Kuhn entered the arena together with thousands of uniformed Nazi guards. During the rally he and his fiery fellow orators held back no punches, calling President Franklin D. Roosevelt: “Franklin Rosenfeld,” and referring to his New Deal as a “Jew Deal.” 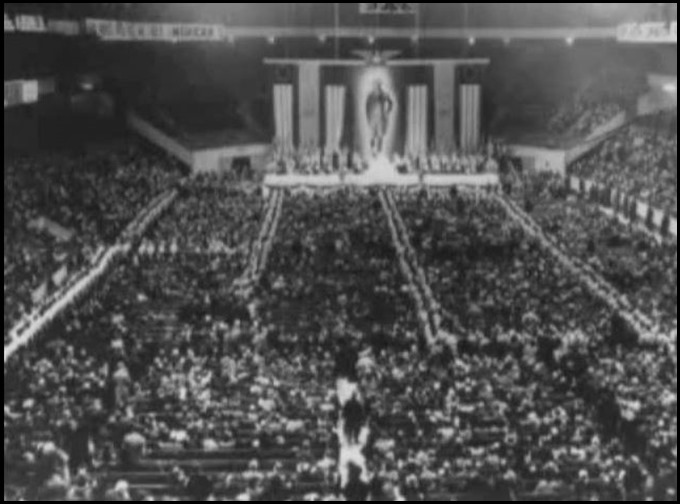 Being a creature of the night, Kuhn loved nightclubs, drinking, and the company of women (among them his two mistresses, Virginia Cogswell AKA “The Marrying Georgia Peach−on account of her previous seven husbands”, Florence Camp, Frau Hedwig Munx, and others). Just like many petty dictators, he was pompous and didn’t understand his own limitations.

Once during a testimony before the Dies Committee, he was asked by Congressman Starnes if the reason why 23 of 71 Bund units concentrated in and around New York City was because the aircraft and naval manufacturing facilities were handy for sabotage. He replied: “That’s the same thing Lipshitz said. You know who Lipshitz is? That’s Walter Winchell [referring to Winston Churchill]. Lipshitz is his real name.”  No one was amused.

It’s interesting to note that during the mass Nazi rally in Madison Square Garden, the NYPD provided the event security and protected the Nazi leadership and participants. An attempt by a former New York magistrate to serve a summons for the arrest of Fritz Kuhn in relation to a criminal libel suit filed earlier was stopped by the NYPD. As the event went on, outside protests broke out and the following peaceful demonstrators were beaten, arrested, and charged with disorderly conduct:

Shortly after his rock concert−like appearance in Madison Square Garden, New York city’s mayor, La Guardia, who was fed up with the constant anti−Semitic and anti−American agitation, started an Al Capone−style financial investigation of the Bund’s taxes.

When asked about his relationship to Florence Camp during his trial, Kuhn denied that he had asked her to marry him and noted that Mrs. Camp was too much of a lady to accept a proposal after just a few days’ acquaintance. Herman McCarthy (the prosecutor) whipped out a Kuhn letter and read it aloud:

“Florence : I am terrible in love with you. I beg you to become my beloved wife. I will always be true to you. . . .”

In another letter to Florence he said that he loved her with his “whole soul and body and was about to have [his] teeth fixed.” 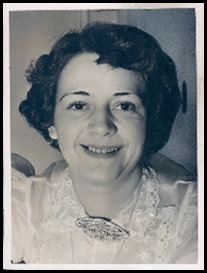 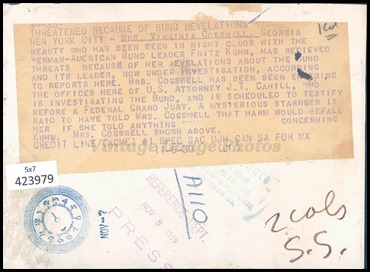 In the course of the trial, it was established that Kuhn had pilfered $14,548 from his organization ($717.02 of it having been spent on moving expenses for Mrs. Camp). Kuhn was swiftly convicted on charges of embezzlement, grand larceny, and forgery and was first sent to Sing Sing Prison.  After the war, he was deported to Germany, where he managed to get into trouble again. 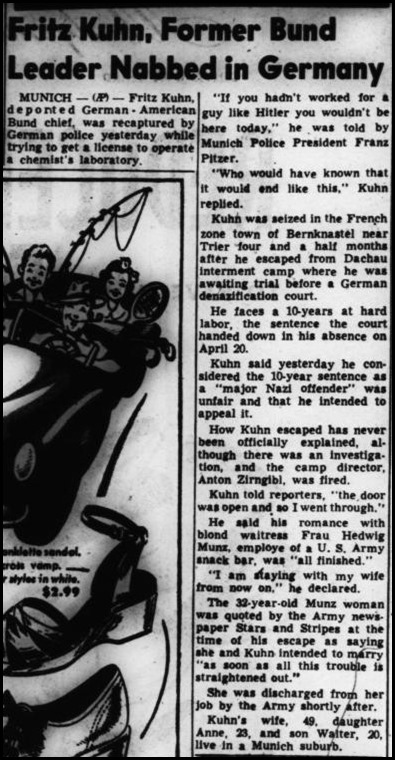 In 1949 when he again stood trial in front of a Munich court this time on charges of escaping from jail and being a major Nazi organizer, he claimed that the Bund was strictly “an American patriotic organization,” that he had used the swastika only because it was “an old American Indian design,” and that he had patterned the Bund’s uniforms after the US National Guard, not  the SS. As for his 1944 meeting with Hitler he said:

“It was purely a social call. If I went to England today, I would naturally like to call on King George.”

When the US. entered the war, whatever was left of the German−American Bund organization quickly disintegrated, however, that didn’t spell the end of Nazi activity in America. Another high profile organization waiting in the wings was the Steuben Society. In comparison to the Bund which was composed of common National Socialist riff raff, the Steuben Society represented the cream of the crop to the US Nazi aristocracy. 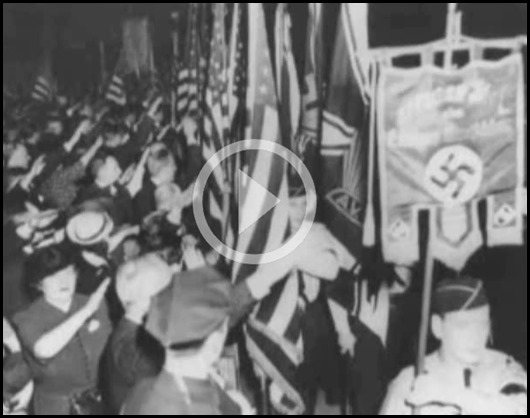 Although Steuben Society members avoided public Nazi displays such as hailing Hitler, the differences between the two organizations were only skin deep. When it came to hard core issues such Nazi ideology, they were indistinguishable.

While visiting the reception room of the Steuben Society in New York, John Roy Carlson observed:

“One could find a large American flag standing in one corner. On the walls were pictures of Von Steuben, Washington, and Lincoln, The Pledge to the Flag and the Bill of Rights hung framed between them. There was also no lack of red−white−and−blue. Patriotism oozed from every crevice in the room.”

True to its nature, the Society published “The Steuben News” a newspaper for Patriotic Americans which described itself as:

“. . . a patriotic, civic and educational political society endeavoring to awaken in the hearts and minds of American citizens of German extraction the necessity for taking a more active part and interest in the political affairs of our great country.”

Its program demanded “strict discipline” on the part of its members, and rejected “persons who are shifters and trimmers, or who are known to possess no race pride.” The Steuben Society strongly emphasized Racial (Aryan) consciousness and political objectives.

In his 1943 investigative book Under Cover, Carlson wrote:

“…The Steuben News reprinted articles from the pro−Fascist Italian daily, Il Progress Halo−Americana. It recommended books by the notorious Ausland Institute and ran many articles by Nazi agents. The Steuben News praised as “extraordinary and valuable” the book Scarlet Fingers published by Flanders Hall, the propaganda mill financed by Nazi agent George Sylvester Viereck. The Steuben News followed the accepted party line of pro−Nazi isolationists. It headlined the speeches of Lindbergh. It championed the late senator Ernest Lundeen−some of whose speeches were written by Nazi agent George Sylvester Viereck−and on one occasion devoted eleven columns to one of his defeatist speeches. It reprinted from Social Justice and The Herald, American Fascist weekly. It ran large advertisements for the America First Committee, reprinted its bulletins and urged its members to support it financially. The Steuben Society fought desperately all measures to arm those European Democracies which resisted Hitler’s brutality. And it also quoted liberally from the New York Enquirer, published by William Griffin, who was later shown to have associated with Viereck.”

Now, you’re probably thinking: “This is a fascinating piece of history, but what’s the relevance of all of this 1939 Nazi stuff to our current 21st century jet−set life style?” Well, wonder no more.

This past Sunday morning on our way out of our local diner, I caught sight of the newspaper stand in the entrance vestibule.  I usually don’t read printed media, but the name of the paper and the motto “A Newspaper for Americans” caught my attention. Curious about how the Steuben Society’s defines “American,” I picked up my free copy and read on.

At the top of the cover page on each side of the title “The Steuben News” were the mission statements: (1) United for Common Interests and Common Needs” and (2) DUTY, JUSTICE, TOLERANCE, CHARITY.

I flipped through and read some of the articles. There was an announcement of a presidential proclamation regarding the German−American Day, a story about the treaty between German settlers of Texas and the native Comanche Indians. My first impression was that it all seemed rather banal. Then I got the last page. Under the calendar of events, I ran into some terminologies like “event sponsored by Unit #998” and “contact Brother Erick or Sister Hildegard.” That seemed a bit cryptic and militant. At the bottom of the page I saw the membership form which prompted an unexpected double−take.

The membership form, unlike any other application I have ever seen,  had questions about the nationality of the applicant’s father and mother, political affiliation, and—most surprising of all—about naturalization. For some reason, the Steuben Society (acting in the capacity of a quasi−government organization?) will only issue membership cards after careful evaluation of the applicant’s naturalization certificate, which includes scrutiny of the certificate number and place of origin. (I’m kind of curious to know who at the INS helps them validate these applications.)

From what I can tell, this membership application has remained consistent over the years. After conducting a quick search on−line for similar historical documents, I found one for the Silver Shirts, and as you can see from the contents, not much has changed in terms of drilling down to pedigree and other über eugenics. 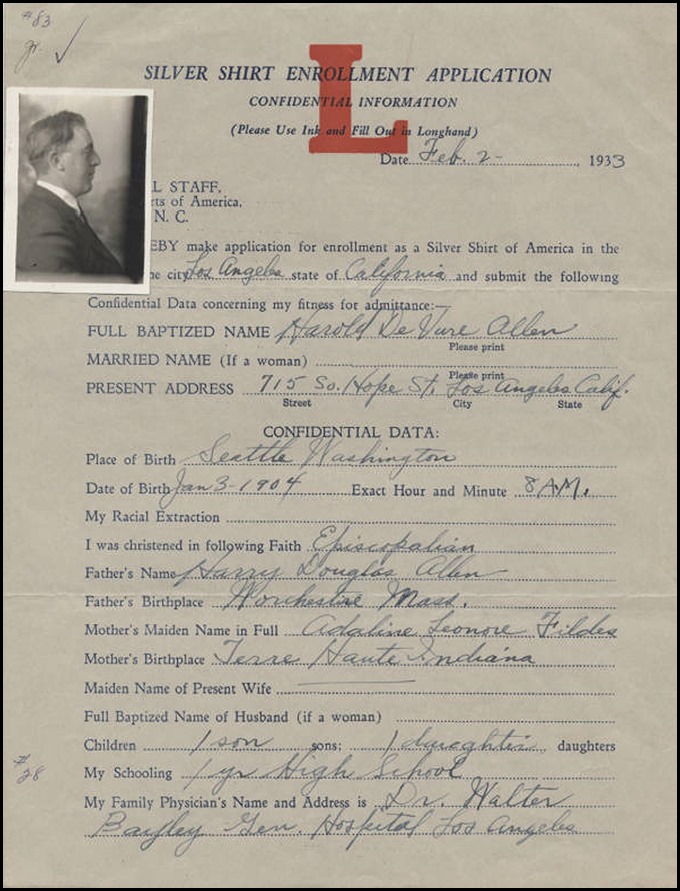 When, I checked out the Steuben Society’s website for the name and location of the chapter nearest me, I discovered that they are all named after some distinguished German figure. I was hoping to find a chapter honoring the likes of von Stauffenberg, but alas, no such luck.

I am not sure what to make of all this. I hold German culture, ingenuity, work ethics, and organization in the highest esteem. I’m an avid admirer of Handel’s music and Nietzsche’s, Kant’s, Goethe’s, and Leibniz’s writings. My family originated from Germany and in my travels there I have found most German people to be kind, polite, friendly, and exceedingly intelligent.

On one hand, it’s laughable that anyone would be willing to complete an application detailing his mother’s nationality or his naturalization number in order to join a civic organization. On the other hand it’s really disturbing that in 2010—the age of the internet—a nationwide fraternity that draws its philosophy from one of humankind’s darkest moments, continues to operate in the mainstream with apparently unrestricted access to leading politicians and public figures.

If you are considering joining an organization such as this, take a breather and dedicate some time to learning the German language, literature, philosophy, and music instead. You will discover that the richness of Germanic culture has a lot to do with individuality and little with purity of race and blood.

4 thoughts on “Only the Racially Pure Need Apply”