We were going over some Indiana Jones trivia during dinner recently and one of the questions that came up had to do with the length of an item that appeared in the Raiders of the Lost Ark called the “Head of the Staff of Ra”.  The discussion must have triggered some long lost memory because I suddenly remembered that in the movie, that object—which is a sort of a medallion—had an inscription on it.

Hoping that there was a quick way to figure out the math, I searched online for the phrase “head of the staff of Ra” and got an image of the original prop used in the movie. Sure enough, both sides had a clear and legible engraving in none other than ancient Hebrew script (also known as Paleo-Hebrew).

Transliterations and translations of the inscriptions are as follows:

As soon as I translated the text, I realized that it had some glaring stylistic and contextual problems. First, the writer chose the word for “add” to be מעל which usually means ‘above’ or from’ as in Kings 1:20:41:
וַיְמַהֵר–וַיָּסַר אֶת-הָאֲפֵר,מעל עֵינָיו; וַיַּכֵּר אֹתוֹ מֶלֶךְ יִשְׂרָאֵל, כִּי מֵהַנְּבִיאִים הוּא
And he hastened, and took the headband away FROM his eyes; and the king of Israel discerned him that he was of the prophets.
The proper form should have been a word based on the root יסף. Second, the form of קדש כבוד is never used together in reference to holy offerings. The form should have been קדש ל’ה as in Exodus28:36:
וְעָשִׂיתָ צִּיץ, זָהָב טָהוֹר; וּפִתַּחְתָּ עָלָיו פִּתּוּחֵי חֹתָם, קֹדֶשׁ לַ’ה
And thou shalt make a plate of pure gold, and engrave upon it, like the engravings of a signet: HOLY TO THE G-D.
Also, from the paleography it’s clear that the author mixed several glyph styles when creating the inscription. As can be seen from the table below, the word “TT amah” uses letters

that are a mixture of 9th and 10th century BCE glyph styles. It should have been written using the 6th century BCE style. The reason for this is that the Temple of Salomon where the Ark of the Covenant was kept was built between 950-850 BCE and was destroyed in 586 BCE by the Babylonians. If the medallion is a record of the secret location of the Ark, it should have been written in an alphabet style from the period of the temple destruction not its construction.

Paleo Hebrew alphabet styles from the 13th century BCE to 6th century BCE
Beyond the script issues, the inscription itself has contextual and artistic problems. For example, the candelabra (Menorah) at the top of the medallion has only six branches, instead of the seven stipulated in Exodus 25:31-40 and shown on a slew of ancient Menorah depictions on coins, lamps, jewelry, mosaics, tombstones, monuments, and inscriptions:

Image 1: Sample of ancient depiction of the Menorah as having seven branches
It is conceivable that the artistic team deliberately avoided the accurate portrayal of the menorah and the correct sentence structure and vocabulary on the inscription because of the prohibition in Exodus 20:7 “You shalt not take the name of the Lord thy G-d in vain” and Exodus 20:19-21 (see Avodah Zarah 43a reference at bottom of this post) to reproduce the actual menorah, but this could also have been just an oversight.
The other obvious problems with the inscription’s content are:
Problem 1 – The movie script doesn’t jibe with the text in terms of translation
Problem 2 – The staff height measurement units used are inconsistent
Problem 3 – The seared imprint on Major Toht’s right hand is the obverse side of the inscription


When Imam translates the text for Indy (see script below), he says: “This is a warning not to disturb the Ark of the Covenant”, yet that warning doesn’t exist in the inscription. It’s also a puzzle why Indy can’t translate it himself considering that he is a professor of archeology who graduated from the University of Chicago with a major in linguistics. Also, contrary to Imam’s claim that Indy should “…take back one kadam to honor the Hebrew G-d whose Ark this is”, the obverse inscription clearly calls for exactly the opposite: to ADD one amah to the base value.
Problem 2


Imam further states that the base height of the staff is six kadam and according the Salah’s calculation, this is about 72” (it’s actually 69”). The problem with this calculation is that we don’t know where Imam is getting the 6 kadam figure from. The inscription uses the term amah on both sides of the medallion. Interestingly, Egypt abandoned the use of the kadam in favor of the metric system in 1891, 45 years before the timeframe of the scene in the movie. Technically, then, Imam should not even be using the term.

Assuming that the reverse side of the medallion is the form found in Kings 1:6:2 and it is following the formula ‘amount x cubit’:

(Hebrew is read from right to left). In Hebrew, each letter of the alphabet has an associated numeric value and the value of X (or ת value in post sixth century BCE Hebrew typography) is 400. So XX could be read as 400+400=800 amah or 472 feet. Even if we read the first two letters XX as the spelling of the letter Teth

which equals 9, it would make the staff about 13 feet. This doesn’t make any sense as we can see clearly from the movie that the staff is about 7 foot tall.

So in the case of problem 2, either there is a special way to read the XX value as 69” or the value in the inscription is wrong and should have been written as

The seared imprint on Major Toht’s right hand is actually the obverse side of the inscription. This means that contrary to Indy’s statement, Belloq had no way of getting the base staff height because the reference is located on the reverse side. On the other hand, if Belloq managed to get the base height somehow, he than had all of the missing information to construct the right height staff and in fact his staff was not too long. 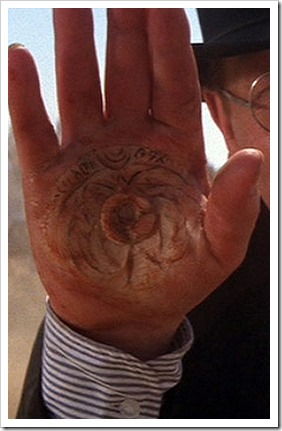 So how long is the staff or Ra? It’s impossible to tell using the inscription. One thing is for sure, just like in anything else in life, G-d is in the details. Creating a plausible fiction that relies on an actual ancient language, epigraphy, biblical scholarship, historical facts, and math, and then wrapping the whole thing up in a dramatic screenplay seems to be just too complex of an undertaking. To paraphrase Mark Twain “It’s no wonder that truth is stranger than fiction. Fiction has to make sense”.

Imam: Come, come, look. Look here… look. Sit down. Come, sit down.
Indy:   What is it?
Imam: This is a warning not to disturb the Ark of the Covenant.
Indy: What about the height of the staff, though? Did Belloq get it off of here?
Imam: Yes. It is here. This was the old way, 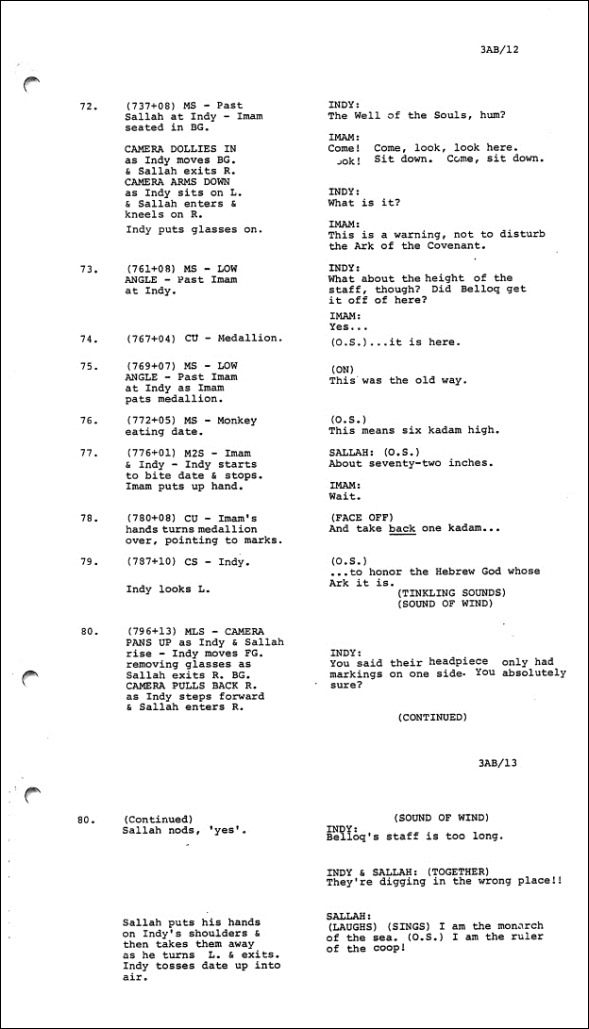 Sources and References
Avodah Zarah 43a

The baraita continues: Rabbi Yosei bar Yehuda says: One may not fashion a candelabrum of wood either, in the manner that the kings of the Hasmonean monarchy fashioned it. When they first purified the Temple they had to fashion the Candelabrum out of wood as no other material was available. Since a wooden candelabrum is fit for the Temple, it is prohibited to fashion one of this kind for oneself.

I got a question from a reader about the possibility that part of the language of the inscription describing the height was in Ugaritic and that the tt amh qmtw should be read as a cardinal 6.  This is a problematic explanation because: