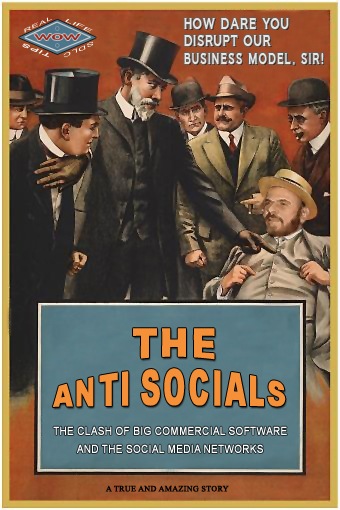 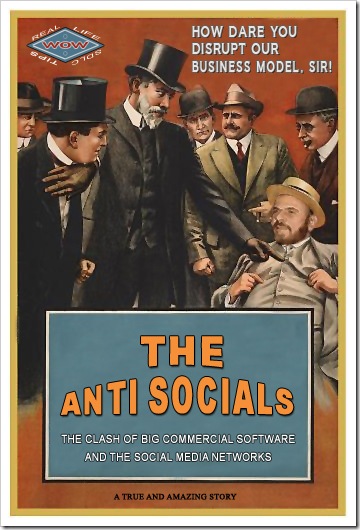 I recently had an opportunity to discuss the question of social networks vs. commercial software at great length with a fellow airplane passenger who happened to be a SVP of technology in a fortune 500 company (which will remain unnamed here).

As we were preparing for takeoff on a cramped CRJ50, I took out my current reading assignment: The Emerging Science of Spontaneous Order. My neighbor sitting in 1D inquired about the subject of my book and during the course of the bumpy flight and the conversation that ensued, he bemoaned his inability to understand how relatively young startups the likes of Facebook, Twitter and Linkedin were so rapidly able to develop so much rich functionality and capture such a large market share, while other much more mature organizations with much bigger budgets and talent pools were failing to make any such inroads.

His frustration is by no means unique. It is a shared by many large technology companies such as IBM and Microsoft which at present are still scratching their head trying to figure out if this social networks thing is for real and does providing a communication platform for income-challenged teenagers makes any commercial sense. To see just how hesitant the traditional software cartels are to dip their toe in the chilly and profitless waters of the social media, examine the social network landscape. I challenge you to identify even one significant, viral product developed by any of the major software vendors.

One example that illustrates this failure to improvise, adapt and overcome is Microsoft’s difficulty in harnessing the emergence of blogging and SMS as commercially viable services. In 2004, after some soul searching, they concluded that it was unlikely that products like LinkedIn would be commercially viable because—they guessed—few professionals would agree to pay a monthly subscription for them. In 2005 even after it became clear that users were indeed moving en masse to open and free social platforms, Microsoft continued to insist that this was just a fad and what these users really needed in terms of social networking were minor improvements to the MSN subscription service, Office Live, and Windows live platforms.

For Microsoft and other leading commercial software vendors, social networking has to be a subscription based because their entire operating model is based on reoccurring revenue (either via subscription or licensing).

Yes siree, for big soft, it’s one of those ‘damned if you do and damned if you don’t’ scenarios. You may find it hard to believe, but the same organizations that made their fortunes outdoing each other with applications like the spreadsheet are now missing the train big time on what is clearly the next killer platform. In what appears to be a blockbuster sequel to Oedipus Rex, they are powerless to leverage this newfangled phenomenon to make any money or capture market share.

Microsoft is certainly not unique with regard to this model. AOL with its Messenger product is another good example of how to squander your entire user base. Following a slightly different tactic, they offered a “free messaging service” with the small caveat that the user would need to install a fat and intrusive client that would quickly pay for itself by monitoring all of your Internet (and network) traffic all the while serving up unwanted advertisements.

If you think that this form of myopathy affects the big software companies, think again. Traditional communications organizations Nortel which should know better (because of their proximity to the social segments) are still trying to survive the proverbial 7 lean years in the hopes that the public social network phenomenon is just a fleeting narcissistic fad fueled solely by generation X’s and Y’s fascination with exhibitionism. In their vision of market paradise, all future social networks will once again go back to being routed and controlled through their proprietary appliances and just like in the good old days they will once again skim the fat profits on a per-server\user license basis.

Whether you like it or not, the social networks are here to stay. They provide meaningful social interaction, are fun to use, and ultimately do what good software is supposed to do: connect people and give them more control over their lives.

My advice to big software is to heed Dylan’s words: “The Times They Are a-Changin”. Don’t wait any longer; jump in now and contribute to the social networks development effort by providing free and open source applications (Seadragon and Wave would be two great candidates). As contrary as it may seem to your operational philosophy, disregard the immediate profitability question and do it because of the tremendous social benefit these products could offer. I have no doubt that in due time, the money, champagne, and caviar will follow as well.

2 thoughts on “The Anti Socials”